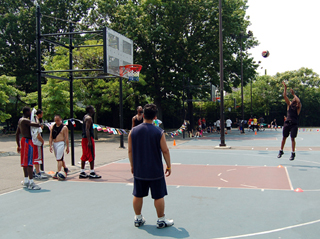 A week or two ago, SLAM Editor-in-Chief, Ben Osborne found a flyer on his way back from lunch. The New York Internationalz, a team estimated by me as probably the 2,873rd franchise in the nine-year barnstorming existence of the ABA, were advertising tryouts in parks throughout NYC for a reduced rate of $125. In jest, Lang and Ben thought I should show-up with $20 and see if they’d let me in. However, my playing days are long over, in fact, they barely began.

Until this Saturday morning, I hadn’t really given the tryout much thought at all. I’d given up on the ABA a bit after the Long Island club called it quits. I sure didn’t miss the two-hour drive to their games. But by coincidence, I scheduled an appointment with my dentist, Dr. Lyle Borman, on the same day as the Internationalz tryouts were held at one of my local playgrounds, Hoffman Park in Queens. Doc’s office is right near that park. It’s on a busy corner where trains and buses connect, a spot where Queens and Woodhaven Boulevards meet. St. John’s Hospital, where my mother has worked for 40-years, is on one side of the playground and the Long Island Expressway entrance on another side separates the park from two very busy streets.

I parked my car off the corner about a block away from “Hoffman.” It’s not far from where the “McDowell’s Restaurant” scenes in “Coming to America,” staring Eddie Murphy were shot. As I got closer to the park, I noticed tiny plastic flags of many nations hanging like tiki torches around the two courts that were reserved for the Internationals “pro tryout.” I stood and stared as two or three players shot around with official ABA red, white and blue basketballs. The team staff continued setting up; hanging tri-colored nets and banners. The park was mostly empty, except for one pick-up game going on the single unoccupied far court. So empty, in fact, I was spotted almost instantly.

“You got your sneakers with you?” a man says from behind a bench.

“I don’t really play ball like that,” I answered back. Which inspired the man to let out a hard laugh.

After making moves to Doc’s office, I found myself sitting in the waiting room thinking about going back down to ask a few more questions about the Internationalz, it’s rare that you actually get to see any ABA press releases come alive. Doc Borman is one of the best in the business and he’s a pretty big hoops and jazz fan, so we always have a lot to talk about. Today, I was amazed to find out he was using a laser drill and that I wouldn’t require any annoying pain-killing injection. I was amazed by the progress of modern dentistry. Although I’m sure I was very behind on this development, I figured I’d gotten lucky somehow and should try and give an ABA team some press.

Once out of the dentist’s chair and back on Queens Blvd, I passed by Hoffman and saw the tryout in full swing. Although the Internationalz only drew about seven players, they all seemed pretty serious and one or two of them even looked like they could play a little ball. I went home, grabbed a tap recorder and picked-up a photographer friend, Maggie Coughlan, to take some pictures for me.

Back in the park, I see that the guy who asked me if I wanted in is wearing a pretty dope t-shirt promotion not only the “NYCIZ,” but the practice at Hoffman itself. I learn that the man’s name is Anwar Sharhan.

“We’re seeding our brand out here, you don’t have to be interested but you can’t help but notice us,” says Sharhan, who is supervising drills himself. He and his partner Harvey Li started the team in September 2007 and has been working toward playing in the ABA this fall. “We’re doing a lot in the community, Big brothers, Big Sisters, we’re working to feed the homeless in the Bowery. We’ve got a basketball festival coming up in August. “

As you know from our “Breaking News from the ABA” column in HYPE, the ABA has a long history of partnerships, new initiatives and other moderately bizarre-announcements. The Internationalz are already thinking ambitiously. They’re hosting these tryouts at four parks around New York City and aim to fill their roster with a diverse array of players from around the world. They also have a unique system to help develop talent.

“We have a completely International-based staff, meaning most of the people on my staff are first or second generation American,” says Sharhan, who chooses not to reveal roster or venue specifics. “I have a Guatemalan National player, I have some cats from Uzbekistan, and a couple other areas as well. We’re going to have one ABA team and a five-on-five 10K pro-am made up of mostly multi-cultural teams and a ladies team. Those 10 pro-am teams will have a chance to make the ABA roster.”

While I’m not sure the Internationalz plan is totally foolproof, it did make me think about why minor league basketball has gotten such a bad rap. The NBA was very generous in supporting the D-League, but why don’t people like seeing semi-pro basketball like they do minor league baseball and hockey? In the 90-degree heat of a city’s summer, Sharhan and Li are passionate about the game, up early – “7:30 sharp,” their flyer read – and trying to create a few more professional basketball jobs in this mucked-up economy. They’re out there hanging the nets themselves and making sure the soft-drinks they got from Snapple, a team sponsor, stay cold for the few guys who did find out about their tryout. In the middle of an arguably exciting NBA Finals, these six dudes, regardless of their skill level, are soaked in sweat from their search to live out a pipe dream. Even if this is as far as they went, it’s more than a lot of people – including most of their critics – have gone.

There hasn’t been a truly stable minor league for basketball and there maybe never has been. Right now, outside the NBA-supported D-League, the Premier Basketball League probably had the most successful run last season and even they lost two teams. The ABA lost dozens of teams early in the year, the CBA lost one or two, and the USBL suspended operations. Will American players ever be able to earn a living outside the NBA? One could argue even minor league soccer is more popular.

The D-League has established itself as “THE AAA” of the NBA and they’ve done a good deal to restore some integrity to minor league basketball. The next problem is, building a functional developmental system on numerous levels. Basketball now needs a legitimate “AA” league and a number of smaller “A-ball” leagues in regional pockets throughout the country. However, the NBA might deserve a pass here. They’ve got the D-League and the WNBA to worry about, along with the best basketball league in the world, of course.

Having written and studied a ton about minor league basketball over the last few years, I can say there probably isn’t any kind of quick solution to improving “pro-basketball” on a large scale. For now, it’s up to people like Sharhan and Li who believe in the game and support their team out of a “labor of love.” Although the two are planning a documentary film series and clothing line in conjunction with their various projects, they’d be anywhere but the Boulevard of Death, in this heat, if they were into basketball for the wrong reasons.