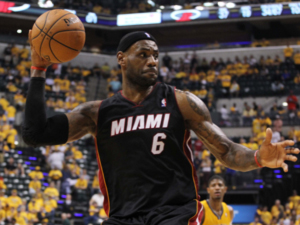 The Indiana Pacers and Miami Heat are matched up in the Eastern Conference Finals for the second consecutive year. Neither team lacks star power, with Paul George leading the Pacers and the four-time NBA MVP and two-time Finals MVP LeBron James leading the Heat. The Heat have relatively coasted through the Playoffs up until this point, compared to the Pacers who have had to fight and sweat it out in both of their earlier round series. Finally the Pacers looked like a dominant team, taking Game 1 on Sunday by a score of 107-96 in Indianapolis. Then last night the Heat bounced back like the defending champions they are and stole a game in Indy by a score of 87-83 to even up the series as it will head to Miami for the next two games. According to TiqIQ, the Game 2 win has helped spark an increase in ticket price on the secondary market in Miami.

Miami Heat tickets for Games 3 and 4 at American Airlines Arena have risen 2.67 percent since the end of Game 2, and the average price is currently $461. The Oklahoma City Thunder have the next highest secondary market average price of $357.62 for the four remaining playoff teams. The Heat’s opponent, Indiana Pacers come in with the lowest average ticket price at just $305.08.

Of the four remaining teams, Miami also had the highest average price in the first two rounds of the NBA Playoffs. The Heat in the regular season were second only to the New York Knicks in average price, with the Knicks coming in at $236.52 whereas the Heat were just below that with an average of $233.43.

The Heat and the Pacers have both emerged as the power of the Eastern Conference and as of recently are bitter rivals. The Pacers and Heat split their regular season series 2-2. In each of those games the home team won every game. The Heat has already broken that trend taking a playoff game on the road. With the series tied at 1-1, can the Pacers take back home court advantage by winning a game in Miami—something they haven’t done in almost a full year dating back to the conference finals last summer. This series is sure to come down to the wire as the Heat look to go back to the NBA Finals for the fourth-consecutive year and the Pacers look to get back to the Finals since the playing days of Reggie Miller. The Pacers and Heat next play on Saturday, May 24  at 8:30 p.m. EST in Miami for Game 3.