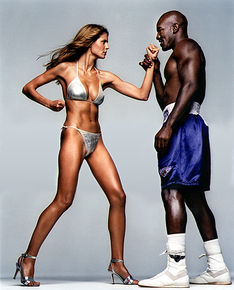 3) “Laguna Beach” — It’s ba-ack. Last night I got home from the Steph thing (see below) and flipped on the TV, and caught the season premiere. Loved the way a couple of the old kids were still hanging around, talking about who got fat and stuff. And it was also brilliant how the producers immediately, and I mean within the first 30 seconds, set up which new kids were good and which were bad for the rest of the season. If this was a scripted show, it would deserve an Emmy for the writing. It probably does, anyway.
2) “Project Runway” — I know, I know…not that there’s anything wrong with that. But it’s

actually a pretty funny show. Wifey loves it, which is how I initially got roped into watching each week. But now I kind of like it. My favorite thing is how Heidi Klum just mangles her lines — she sounds like the Terminator sometimes. And I also like how the sidekick guy, Tim Gunn, comes in and blasts all the work the contestants have done minutes before they’re supposed to show off their work to the judges.

1) “The Contender” — Last season’s show was great, and even without Sylvester Stallone on there this season, it’s still really good. The fight on this week’s episode featured a devastating knockout. I do miss that they eliminated a lot of the goofy challenges they had to do last season, and every episode, right around the half-hour mark, has these predictable, maudlin featurettes about all the obstacles each fighter has overcome. But then they fight, and it’s awesome.

Anyway, a few Links…and I mean a few…nothing out there today…

QUOTE OF THE SUMMER
“I got arrested when I was 12 years old for taking a gun to school — a gun I stole from my grandma.” — Ron Artest.

THE LINKS
• Bruce Bowen is dunzo with the National Team. It’s not like I told you multiple times or anything.

• When Ron Artest stopped by the office earlier this week, he made no mention of giving a rambling talk to kids where he took credit for ending trouble during the brawl in Detroit. I think he was trying to topple Dennis Scott‘s long-held record for inappropriate things said to children during a speech in the summertime. There’s enough good stuff in here to make it an all-Ron Quotes Of The Day, although that would be too easy. But don’t miss Ron’s stories of selling crack or trying to get the guy who hit him with the cup on his album.

• Sounds like The Sternbot sent a phalanx of executives down to New Orleans to help the Hornets drum up some cash by selling ads throughout the arena. What’s remarkable is the quote from Hornets owner George Shinn about halfway through the story:

“The NBA said we didn’t do everything as well as we should have, but they’re helping us to to get it done right this time. We don’t have to pay any of these guys and they’re highly trained, and that helps because I’m trying to keep the cost down.”

Not a cheapskate, are you?

• I wrote last night about going to Steph’s party, and earlier in the day Steph said pretty much nothing to the beat writers, who tried to make something, anything, interesting from it.

• At least one person thinks the Cavs’ house-cleaning of their announcer’s booth was a good move.