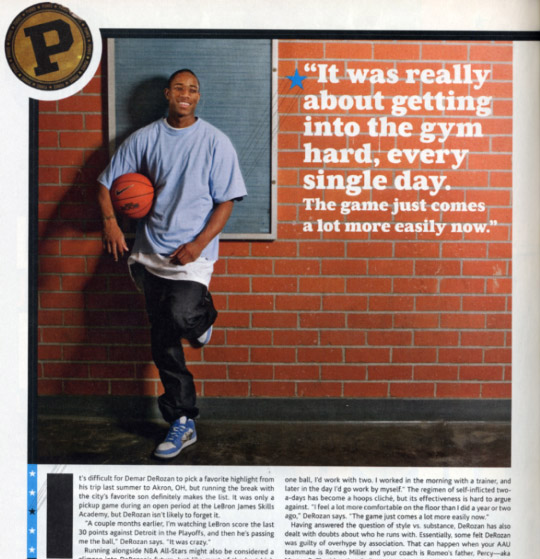 If you needed any reason to tune in tonight’s Dunk-In contest during halftime of the Rookie-Sophomore game, Demar DeRozan is your reason. Simply put, the kid can fly. He has a laundry list of highlight dunks on youtube, too many to single any one out. He was featured in Punks by Ryan Jones back in June ’08, before he became the 9th pick overall in the ’09 Draft by the Raptors. The former USC Trojan is still proving he’s more than just an athlete on the court, but when the Dunk-In rolls around, it’s the only facet of his game we’re going to ask to see.—Matt Lawyue

It’s difficult for Demar DeRozan to pick a favorite highlight from his trip last summer to Akron, OH, but running the break with the city’s favorite son definitely makes the list. It was only a pickup game during an open period at the LeBron James Skills Academy, but DeRozan isn’t likely to forget it.

“A couple months earlier, I’m watching LeBron score the last 30 points against Detroit in the Playoffs, and then he’s passing me the ball,” DeRozan says. “It was crazy.”

Running alongside NBA All-Stars might also be considered a glimpse into DeRozan’s future. Just like most of the best high school players in the nation last July, DeRozan went to Akron to show out at the Nike-sponsored skills camp. He left as arguably the most impressive performer in a camp that included Tyreke Evans, Greg Monroe and Samardo Samuels, confirming his spot in every conceivable Class of 2008 top-10 list—and his likely Lottery status in the ’09 NBA Draft. “That was really my stamp on the summer,” he says.

It’s not that DeRozan went to Akron as an unknown—he was anything but. The question was whether he was known for the right things. A 6-6, 210-pound swingman from Compton (CA) High, DeRozan is a ridiculous leaper in the Jason Richardson mold with a lengthy list of YouTube highlight clips to prove it. His game has been above the rim and eye-popping since junior high, but discerning observers tended to focus on what he lacked—mostly, a consistent jumpshot and a capable handle. “A lot of people said I was ‘just an athlete,’” he acknowledges.

The list of “just athletes” who have chosen to rely solely on their natural gifts and faded from memory is a long one. DeRozan wasn’t trying to add to it. Instead, he chose to bust his ass. “It was really about getting into the gym hard, every day—every single day,” he says. “Instead of shooting 500 shots, I had to make 500 shots. Instead of working on my handling with one ball, I’d work with two. I worked in the morning with a trainer, and later in the day I’d go work by myself.” The regimen of self-inflicted two-a-days has become a hoops cliché, but its effectiveness is hard to argue against. “I feel a lot more comfortable on the floor than I did a year or two ago,” DeRozan says. “The game just comes a lot more easily now.”

Having answered the question of style vs. substance, DeRozan has also dealt with doubts about who he runs with. Essentially, some felt DeRozan was guilty of overhype by association. That can happen when your AAU teammate is Romeo Miller and your coach is Romeo’s father, Percy—aka Master P. The idea that DeRozan caught more shine because of Romeo’s offcourt star power was flipped on its head last fall, when both players committed to USC. Romeo’s fame was the reason he and Demar announced their signing at the Beverly Hills Four Seasons last November, but Demar’s game is the reason OJ Mayo might stick around for another season in South Central.

Demar wouldn’t mind if he did. “I’m in touch with him, but he really don’t say too much,” DeRozan says of Mayo. “If he does come back, it’d be great—it’d be fun for us next year. If not, I’ll just go in there and try to help us go deeper than SC does this year.”

The sense of local pride that will keep DeRozan on his home turf next season should further inflame a local rivalry that’s as hot as it’s ever been. Regardless of whether Mayo and Kevin Love stay in college next season, both the Trojans and rival UCLA will be stocked with locally produced talent. The Bruins have signed a pair of SoCal guards in Jrue Holiday and Malcolm Lee, top-25 recruits whom DeRozan knows well. “We go back to sixth grade playing against each other, and now we all got picked for the McDonald’s Game,” he says. “It’s always motivation going up against those guys.”

Not that DeRozan needs any more motivation. He’s trying to run his hometown next season, then run the floor with LeBron and Co. as soon as possible after that. He’s got all the incentive he needs.