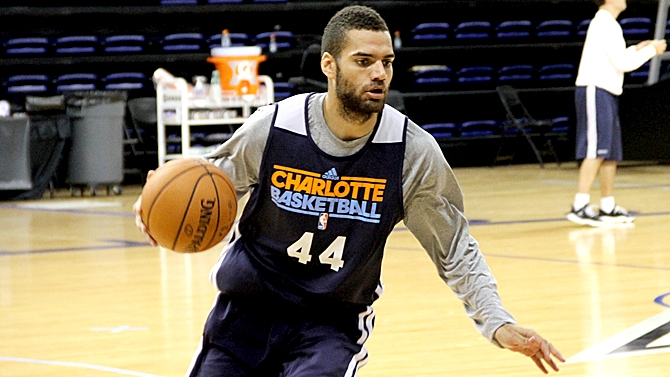 The NBA came down hard on Charlotte Hornets swingman Jeffrey Taylor, suspending him for 24 games, it was announced Wednesday.

With so much focus on domestic violence in pro sports these days, commissioner Adam Silver had no choice but to lay the hammer down.

I have the responsibility to safeguard the best interests of the league and all of its constituents. ln addition to its profound impact on victims, domestic violence committed by any member of the NBA family causes damage to the league and undermines the public’s confidence in it.

It is against this backdrop that I issue this opinion. ln the early morning of September 25, 2014, Jeffery Taylor of the Charlotte Hornets was arrested in East Lansing, Michigan after an altercation at a local Marriott hotel with a woman with whom he was having a romantic relationship. Mr. Taylor was charged with one count of misdemeanor domestic violence assault, one count of misdemeanor assault on a hotel security officer, and one count of malicious destruction of hotel property.

On October 29, 2014, Mr. Taylor pleaded guilty to misdemeanor domestic violence assault and malicious destruction of hotel property; the remaining assault charge with respect to the security officer was dismissed. Mr. Taylor was sentenced to 18 months of probation. As part of his probation, Mr. Taylor must complete 26 weeks in a domestic violence intervention program. Mr. Taylor also must enter an outpatient alcohol treatment program and perform alcohol sensor tests daily for 60 days, after which he will be subject to random testing by the Probation Department. Finally, Mr. Taylor must perform 80 hours of community service. lf Mr. Taylor successfully meets these and other conditions of his probation, his domestic violence assault charge will be dismissed. […] ln the course of the NBA’s review of this matter, I received guidance from a group of domestic violence experts: Ted Bunch, Co-Founder of A Call To Men; Linda Fairstein, former Chief of the Sex Crimes Prosecution Unit of the Manhattan District Attorney’s Office; and Kalimah Johnson, Founder of SASHA Center, a Detroit-based healing and awareness center focusing on sexual assault. I also involved an internal group that focuses on education and counseling of players, including Kathy Behrens, the NBA’s Executive Vice President for Social Responsibility & Player Programs; Greg Taylor, the NBA’s Senior Vice President of Player Development; and Chrysa Chin, the NBA’s Vice President for Player Development; as well as Eric Hutcherson, the NBA’s Senior Vice President of Human Resources.