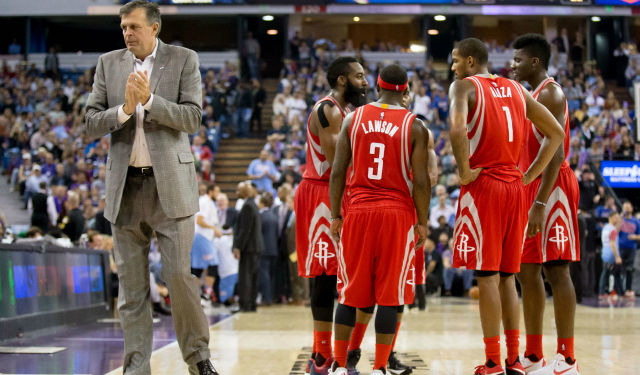 Grueling decision for Rockets, who extended McHale year ago and think the world of as a man.

Houston's 4-7 start demanded change to right season; Bickerstaff will be charged w/ restoring defensive mindset that he installed year ago.

McHale leaves as the winningest coach (by winning percentage) in franchise history. He will be paid $12 million for this season's 11 games.

The team held a highly-publicized players-only meeting earlier this week, to address a number of issues, defense chief among them.

Houston has yet to hold an opposing squad to under 100 points this season.

Ranked sixth in the NBA last season, the Rockets have given up the second-most points per possession this season, more than any team but the New Orleans Pelicans. Once again, improving the defense was a primary focus of Tuesday’s practice. […] “We went back to the basics,” Rockets guard Ty Lawson said. “A lot of pick-and-roll coverages, we had a lot of miscommunication on it. We simplified it today. We’ll see how goes tomorrow. Coverages to let guards into the paint, kick it out. Effort, is one thing we’re lacking right now, that and communication. We got to pick up on both of those ends.”

“It was a good talk for us,” Rockets guard James Harden said Tuesday. “It was good for us to kind of communicate. Each guy said what their role was and how every single night they’re going to contribute to that role. […] After the talk, we had a really good practice. Guys communicated. We worked hard. Now, it’s about carrying over. It’s about going out there and carrying it to the floor.”

Dwight Howard, who would not discuss anything said behind closed doors, had repeatedly called for the Rockets to resist any temptation to point fingers. He did say “It was good for us to sit down and talk” and that the start of the season was “embarrassing.” Beyond that, he typically found a bright side. […] “All this stuff is going to build our character,” Howard said. “That’s what we want. Sometimes, the toughest tests are given to the strongest warriors. Right now, we’re going through a strong, tough test. We’ll see where we are as a team.”