Report: HS Star Turns Out To Be 30-Year-Old Man, Posed As Teenager (UPDATED)

The South Sudan native reportedly posed as a 17-year-old at Catholic high school in Canada. 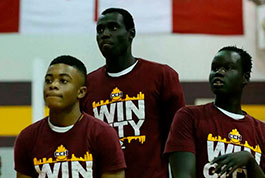 We’ve heard plenty of bizarre stories at the high school level throughout the years, ranging from recruiting nonsense to on-court antics. But this one might be the best one of them all. A 30-year-old man from South Sudan named Jonathan Nicola managed to get on the varsity team at Catholic Central in Ontario, Canada, by pretending to be a 17-year-old high school student. He was recently arrested by the Canada Border Services Agency.

More info below on this crazy story from the Windsor Star:

Jonathon Nicola, who became a well-known high school basketball player, was being kept Wednesday at the South West Detention Centre.

The Windsor-Essex Catholic District School Board is keeping tight-lipped about the situation.

Nicola wasn’t just your average player, either. He was the team’s star player.

The Canada Border Services Agency said Wednesday officers arrested Nicola for allegedly contravening the Immigration Refugee Protection Act. He is being detained under the authority of that act. The agency didn’t elaborate on what Nicola, who is in Canada on a student visa, is accused of doing.

Nicola, at six-foot-nine and 202 pounds with a shoe size of 16, had been attending Catholic Central as a 17-year-old Grade 11 student. He was also a star on the Catholic Central Comets senior boys’ basketball team.

He was even living with Comets head coach Pete Cusumano through a program called Canada Homestay, which finds homes for foreign students.

Cusumano said Wednesday he wasn’t allowed to talk about the situation.

Nicola seems to have had a good reason for what he did, though:

Nicola told the Star in the January feature story that he arrived in Windsor on Nov. 22, 2015, just three days before his 17th birthday. He said he left South Sudan, his disease-ridden, wartorn home, for a better life in Windsor.

“A few of my friends know of my background, how we live over there,” he said in January. “I don’t know how many of them have a clue of how it is in Africa.”

UPDATE 4/29: Earlier this week, the Toronto Star reported that Nicola stated in a hearing this week that he simply didn’t know his real age because his mother has never clarified it to him. See below:

Wearing a loose orange jumpsuit, Jonathan Elia Nicola, who has been held by immigration since April 15, attended a brief detention hearing in Windsor on Tuesday and was ordered to remain in custody because he was considered a flight risk.

He did not provide further testimony at the hearing, but at an earlier detention review, the 6-foot-9 Nicola, who was enrolled in Grade 11 and played basketball on his Windsor high school team, said he did not know how old he really was because his mother kept telling him different ages.

“I aways keep asking what is the specific age that I was born, and she has told me that she could not remember,” he told the April 19 hearing.

All he wanted, he told officials, was to get a good education in Canada so he could support his family back home.

“I am not a liar person. I am religious. I pray to God . . . If something bad happen to me here, I do not know what would happen to my mother back home because she is really sick. She has diabetes,” Nicola said.