I gotta lotta problems with you people! 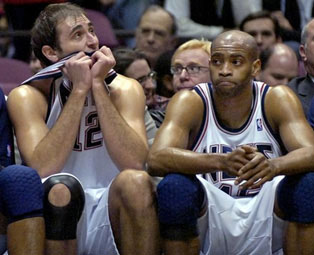 I’ve been thinking (uh oh). It’s holiday season and festivus is rapidly approaching. Time for the Airing of Grievances. Please do not accuse me of ripping off this blog. I’m jealous that I didn’t think of that for the name of my own blog first.

This is the list of NBA teams that have disappointed me so far this season. If you visit this site regulary, you might have a perception that I’m a nice guy with a good sense of humor. Wrong. I got a lotta problems with you people! And I’m gonna let you know about it!

1. New Jersey Nets. They do not deserve to win a division title. Vince is in a contract year and he still looks bored out there sometimes. Jason Kidd is still good enough to get minimalist triple doubles of 12-10-10, but he’s playing at quarter speed. I think the new ball is affecting his passing touch too. RJ is not taking his game to the next level, which we’ve been waiting for since Y2K. He’s always banged up too. Nenad is a jump shooter and Jason Collins might be the most pointless long-term starter on a supposedly yearly contending NBA team. That’s just the starters. The bench is even worse. I could name names, but let’s just throw them all under the same umbrella and say they’re not getting it done. Hassan Adams is playing hard, but so what.

2. Sacramento Kings. A team that stood toe to toe with the Spurs last year in the playoffs and didn’t back down. This year they’ve got some injuries like Brad Miller and Ron Artest, but Kevin Martin is emerging and they have too much talent to be this yawnworthy. Bibby, Brad, and Shareef are dangerously close to the fringe of irrelevance. Keep in mind that Miller was an olympian and Bibby is still able to flash what he once was every now and then. Maybe when Ron gets healthy he’ll spark them, but the other day he was talking about needing the ball more. That’s not the Sacramento way. Get it together guys.

3. Detroit Pistons. Tied for the conference lead with Cleveland, and could be on their way to being the one seed in the East. I don’t care, they disappoint me. Last year at this time I was telling anyone that would listen how the myth of the Pistons being 5 hard-playing scrappers outworking the superstars around the league, was a bunch of BS. They were 5 stars, all who had to silence doubters/haters and all of that to get where they are today. Now I’m just tired of them. And Flip Saunders too. It’s not really for any rational reason, but I need a team to vilify and I’m picking the Pistons. It’s easy to pick on all those horrible teams in the East for being so bad, but Detroit has the potential to be a good team. I don’t want to see them reach that potential. I am hating just to hate. Does that make me the bad guy? Good.

4. LA Clippers. The new era of Clipperdom is not underway. They are loaded with talent and a proven leader in Sam Cassell. They started out playing great with Elton Brand just playing in the flow. Then Elton started playing better and the rest of the team stopped playing. Chris Kaman’s been banged up, but does he maybe have a little case of post-contractitis? Aaron Williams was starting at center for them recently. Yeah, a guy that used to be a back up for the aforementioned Jason Collins.

5. Washington Wizards. This was the summer of Gil. I couldn’t turn on my computer without reading about Gilbert Arenas and his infinite comedy. Not only was he being funny, but he promised he was training harder than ever and he was on a mission to score 100 and he made all kinds of crazy promises. Until last night at MSG, the Wizards hadn’t won a road game. Gil has been the proverbial feast or famine scorer, and his average is down to 26.8. Thats a nice number, but I was expecting 30 plus and much funnier quotes. Hibachi? Doesn’t do it for me. There was alread a Vinnie “The Microwave” Johnson, and we flirted with nicknaming Ben Gordon “The Convection Oven.” (Glad we didn’t. Sorry J.P.) Now I’m really going to make you spit up your drink: the Wizards trail Atlanta in the standings. They’re starting to play better, but they still haven’t beaten a team whose fans go to the game on the road.

Dishonorable mention goes to: New Orleans for being streaky and threatening to mess up the Saints-Hornets re-emergence, New York because I thought Isiah would at least give them defiant swagger, and Milwaukee because they have too many injury excuses, and Charlotte because I thought they have more pieces in place than you realize and they should be threatening for a playoff spot. Miami has been bad, but that’s expected cause it’s the regular season and they can just turn the switch whenever they have to. Boston, Philly, Portland, Memphis, they’ve all been pretty horrific, but maybe too much was expected of them.

That felt good. Who else has been a huge disappointment to you? Teams? Players?