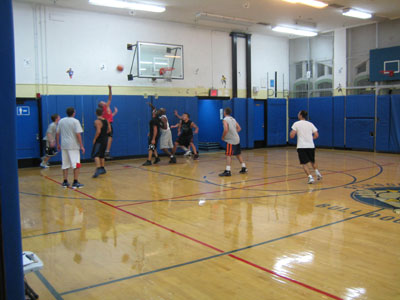 Many luxuries are afforded to Eds. at SLAM, one of which is working in the world’s hoops mecca. But, strangely, organizing a pick-up basketball game has never been easy. Proof? SLAM hasn’t found a gym for a regular company run in over a decade.

That was… until last Tuesday. And IndoorHoops.com deserves the credit.

Just 10 clicks and a three-block walk was all it took for five-on-five ball to happen. Indoor Hoops, a recently launched basketball network, is giving NYC hoopers the ability to pick when and where they want to play.

It’s a simple concept. And it’s an even simpler process.

“I had a vision of keeping something simple where literally, within 10 clicks of the mouse, you can have registered, selected a game, reserved the game, and be set to play,” says Josh Somers, Indoor Hoops VP of Operations.

The pick-up style bball network has 10 locations throughout Manhattan and Brooklyn, and with cold weather set to hit the Northeast, it couldn’t have come at a better time.

Games are carried out exactly as they should be. Members can either make reservations weeks in advance or decide last-minute to play, all done through Indoor Hoops’ website. “You don’t need to get a team together, or be stuck playing once a week 50 blocks from your home,” Somers says.

Sure, outdoor runs in New York can be the highlight of a weekend. But those opportunities, for the regular hooper, are increasingly rare.

Just ask this writer, who grinded to organize weekend outdoor pick-up games over the past two years. Without access to indoor facilities, the blacktop was the only option to get a game together.

If bogus weekend transportation wasn’t enough of a deterrent, try adding into the mix inconsistent weather, ripped-up courts and goals and busy schedules. Basketball is a great game, but not when you’re stressing it.

Take it upon yourself to get in your own game, and you might end up with any of the regular cast of unappealing characters: the OD sweaty guy, takes-his-shirt-off-all-the-time guy, all fired up guy, too busy stretching guy, etc.

Matter of fact, Somers’ marketing team is making light of those playground nuisances.

“Humor’s been my No. 1 go-to. So I figured, Why not put together a list of funny rules that don’t really exist in our league, but they all have real meanings?” Somers explains. “Anybody who’s a basketball junkie would look at the rules and be like, ‘Ha! I know that guy.'”

Bolstered by a clean and simple website, finding a run is as intuitive as a bounce pass. With the aid of friend and freelance graphic designer Jamie Silver, ballers can pick where and when they want to play, reserve a spot and pay (games start at $12 for 60 minutes of ball) within minutes.

As with the games themselves, the philosophy behind the website was to not create a lot of rules, and keep it loose. “I wanted to keep it really clean,” Silver says. “I wanted it to function really well. I didn’t want a lot of stuff going on the site.”

Somers and Silver say their friendship allowed them to quickly set-up the website’s framework, giving NYC players the forum to play.

“[We have] a relationship where I’m not upset that he’s making changes, and he will listen to me if I tell him it’s a bad idea. We really get on the same wavelength, and we’re really understanding of each other’s time,” says Silver, whose talents certainly don’t end with web design. “It’s really helpful. He’s probably my favorite freelance client I’ve ever worked with. He’s really understanding when it comes to everything.”

After the first Indoor Hoops game tipped-off on September 13, players of all ages have packed gyms each day of the week. Somers himself has been going to games every night because “I want to be there. I want to meet every player. Shake everyone’s hand as they come in. Introduce myself.”

Freshly stitched with a tough-looking lower lip, Somers met the SLAM crew as it hit the court on the 10th floor of the Mabel Bacon School. Three full-court runs later, and two things were for certain: 1) Ed. & Co. could definitely use this regular exercise, and 2) New York ballers are going to love these gyms.

If you’re a pure basketball head, nothing’s stopping you from testing every location on the map. Somers says skill level will come into play for certain runs, but he encourages adults to play anywhere, any day.

“We pretty much put it in the hands of New York City now and the ballers who live in New York city. They have the opportunity to discover and spread the word,” Somers says.

Feedback already has been incredible. Last week, Somers says his inbox had over “100 letters from people just saying, ‘I just joined [Indoor Hoops], this is great. We’ve been looking for something like this for years.'”

Women’s-only and co-ed games are already on the near horizon. Within a year, expect Indoor Hoops to have locations in the Bronx, Queens and deeper into Brooklyn. If success continues, then it’ll be on to the suburbs—Westchester and Long Island, among other locations.

By the summer of 2012, Somers hopes to start considering expansion into other cities in the Northeast. Philly, Boston and DC are all possibilities.

“That’s why I wanted to go through all this trouble [creating Indoor Hoops]: It’s so there are people playing basketball,” Somers explains.

“Whether it blows up and becomes huge or it stays in 10 locations, I’ll still be happy because we’re giving people the opportunity to play.” 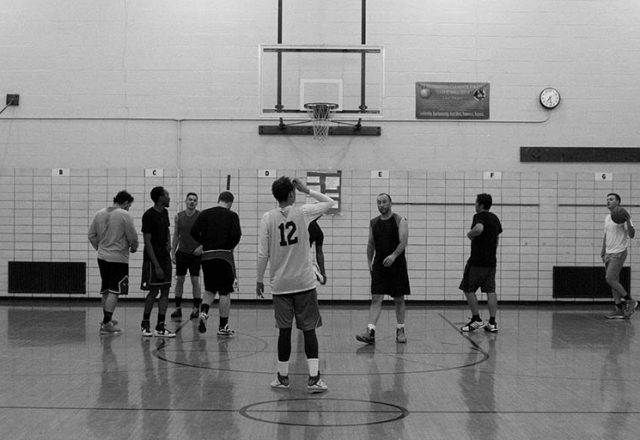