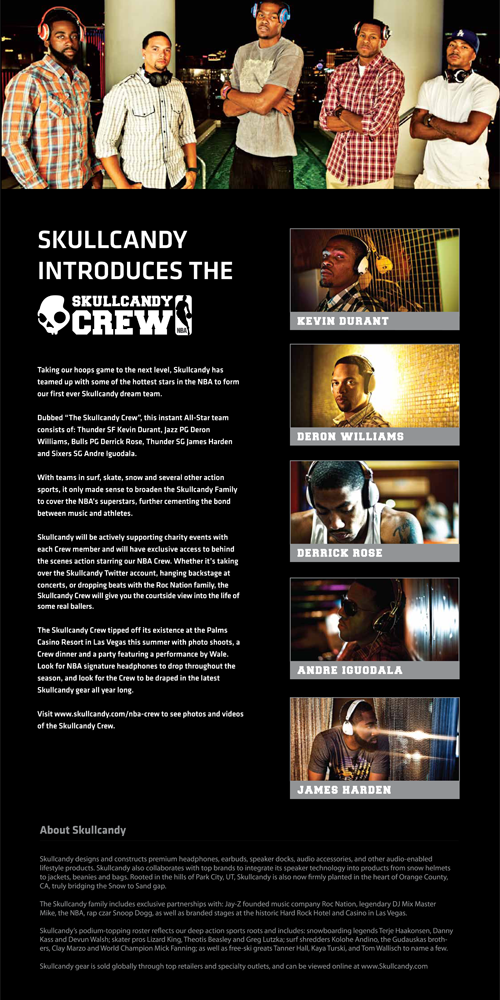 Looks like a solid squad of NBAers have joined up with this popular headphone brand. Via our friends at Skullcandy:

Taking our hoops game to the next level, Skullcandy has teamed up with some of the hottest stars in the NBA to form our first ever Skullcandy dream team.

With teams in surf, skate, snow and several other action sports, it only made sense to broaden the Skullcandy Family to cover the NBA’s superstars, further cementing the bond between music and athletes.

Skullcandy will be actively supporting charity events with each Crew member and will have exclusive access to behind the scenes action starring our NBA crew. Whether it’s taking over the Skullcandy Twitter account, hanging backstage at concerts, or dropping beats with the Roc Nation family, the Skullcandy Crew will give you the courtside view into the life of some real ballers.

The Skullcandy Crew tipped off its existence at the Palms Casino Resort in Las Vegas this summer with photo shoots, a Crew dinner and a party featuring a performance by Wale. Look for NBA signature headphones to drop throughout the season, and look for the Crew to be draped in the latest Skullcandy gear all year long.

Visit www.skullcandy.com/nba-crew to see photos and videos of the Skullcandy Crew.