Is it really just the shoes? 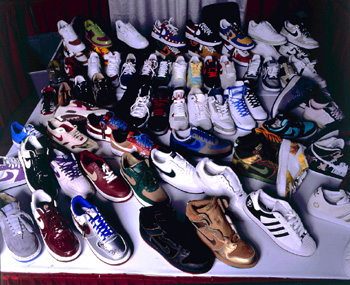 So O (or as you know him, Omar the Gangsta Entertainment Critic) comes to the office on Friday and tells me a story about how shady the shoe game is. Apparently a new colorway of the Jordan fives (or something) came out last week and were retailing for 140 dollars but only a finite amount went out to the chain stores. Some local community stores in his Brooklyn neighborhood bought up a bunch of sneakers and sold them for 250. O’s point was that it was shady and that it was unfair because now it forced kids to ask their already cash strapped parents for extra money or get the dough in whatever unscrupulous way they knew how. I countered by saying that it wasn’t like it was life or death, kids could just by another kind or nothing at all. It was good business for these stores to do that. So what if the prices are escalated, if people were suckers then so be it. This led to a discussion and now some thoughts about consumerism in the shoe game.

What would happen if the kids couldn’t get the 5 they wanted? And what of the adults, the grown dudes who bug out because they can’t get them. Once you’re out of high school is it really still that serious? I don’t even remember my first pair of sneakers really. But I think they were some kind of inexpensive Nike that Ma dukes bought me. The first shoes I really pressured my moms to get were a pair of black Troops. Laugh now but in the mid 80’s Troop was official at least until rumors that they were financed by the Ku Klux Klan came out. Can’t recall if that was ever confirmed or not but in the community the talks reverberated and made it easy for that brand to get played out. I was a Nike head too of course, rocking the Delta Forces and whatever else was out. Putting the pressure of moms for a pair of 60 or 70 or 80 dollars sneakers because my conditioning at the time made it seem that having it was a necessity. When I started working and making my own money is when started noticing how much the shoes were and how insatiable the hunger for hot sneaks became. I changed up and bought what I could afford regardless of what the current trends were saying. I just didn’t get that caught up. I didn’t get it and still didn’t until the last few years where I’ve been around real sneaker heads who drop serious paper like its nothing. Now I can’t throw bricks because best believe I stay fresh to death with the gear. Shirts, jeans, blazers, cufflinks, whatever. I don’t play around, my co-workers will tell you that. I believe in looking your best and if you have to pay to do that then that’s fine. But I’m also cognizant of the effect that marketing has on my sub-conscious mind. Often times I’ll say to myself do I really, really need to get this? Sometimes the answer is yes but often its not. The companies prey on low self-esteem, especially in the inner-city where clothes are one of the earliest and most powerful ways to affirm your success. I still remember dudes in the ‘80’s getting their domes split when Jordan’s came out. It was dangerous. Nowadays it isn’t that bad but I’m still confused on the whole sneaker thing. When I watch documentaries or hear dudes talking about dropping a stack ($1000) or more for some sneakers that cost about the same as a box of cereal to make I’m like what a minute. Are you kidding me? I know the exclusivity of it makes it hot but I can’t see dropping that kind of money for a pair of sneakers. But again if you have the money I don’t care how you spend it. It’s the point that people think they have to get them when I get annoyed. Again we’re not talking about 15 year olds. There are grown dudes with kids doing this and it’s corny. So all you sneakerheads out there explain to me what is too much to spend? I’m speaking to guys (and girls I suppose) who aren’t in the industry and aren’t paid yet have a collection that’s nuts. Beyond all the just wanting to fit in tendencies what makes you do it? And when is enough enough?