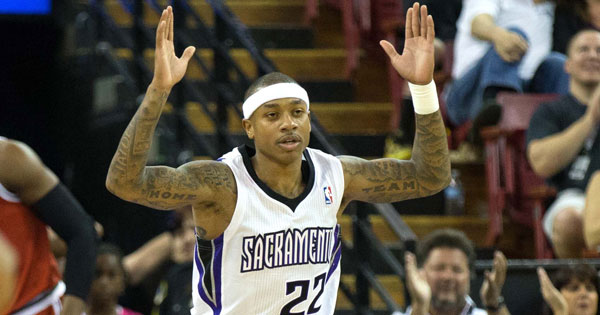 The Phoenix Suns held an introductory press conference this week for newcomers Isaiah Thomas and Anthony Tolliver. Thomas, fresh off a new four-year, $28 million deal, told reporters that he felt disrespected by his old team, and promised to light up the Sacramento Kings next time they square off with the Suns. Per the AZ Republic:

He was one of the club’s more popular players with fans. He was front and center when Sacramento was fending off attempts to move the team to Seattle, representing the Kings in various forums. He forged a relationship with Kings big man DeMarcus Cousins, helping keep Cousins focused and productive when many wondered whether that was possible.

Yet, the Kings seemed to look for someone to replace Thomas at every opportunity.

“They were,” he said matter-of-factly. “I felt very disrespected. Every year it was somebody new. I felt I did a good enough job to show them I was a starting point guard or a guy who could play a big role with their team. But they thought differently. They’re going to go forward without me, and I’m going to go forward with the Phoenix Suns, and I know something special is coming here.”

Of course, Thomas wished the Kings well, said he holds no grudge, but added in that same matter-of-fact tone, “I’m a Phoenix Sun, and when we play them, it will be bad for them.”