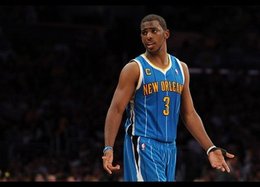 To the endless chagrin of New York Knicks fans (and some of the team’s employees), Isiah Thomas’ influence within MSG doesn’t appear to be shrinking.

If anything — even though he’s not allowed to officially work for the Knicks while he coaches college kids — Isiah appears to have more power within the organization than before.

Amar’e Stoudemire is one of several NBA players currently working out at FIU, and according to the NY Daily News, Isiah Thomas (and Knicks owner James Dolan) are hoping to use this opportunity and others to help lure Chris Paul to New York:

ESPN reported that Stoudemire was working out at FIU which happens to be the school Isiah coaches when he isn’t serving as a de facto GM of the Knicks. There were several NBA players working out at FIU, including Atlanta’s Joe Johnson. None of this is surprising since FIU is located in a favored city among NBA players: Miami. Plus, Isiah continues to share a close relationship with some of the league’s top players. That would including Carmelo Anthony, Amar’e and more importantly, Chris Paul.

This is the reason James Dolan continues to lean on Isiah for advice, even though Isiah doesn’t have an official position with the Knicks. (If he did, Isiah would be in violation of NBA bylaws for having contact with players during the lockout). Isiah played a role in the Knicks signing Amar’e two summer’s ago and he played a role in the Melo trade. He’s now working behind the scenes to help the Knicks land Chris Paul.

Knicks fans may rightfully hate that Zeke continues to be involved with their team in any capacity, but if his endless behind-the-scenes machinations help land Chris Paul, one gets the feeling that they’ll quickly forgive and forget his past sins.