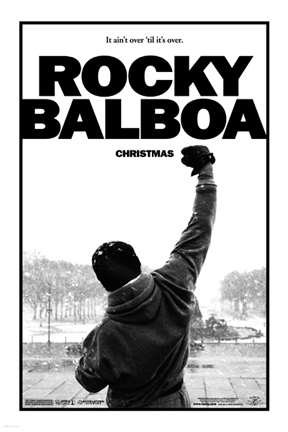 The following are facts:

Shrouded in his brusque and slurred New York accent, Sylvester Stallone is quite the intellectual. Sylvester Stallone has a big fish story about the making of Rocky Balboa that may actually be better than the movie itself and the ability to retrace it eloquently.

But Sylvester Stallone is very badly hiding something.

But that last fact actually adds a bit of charm to the situation.

Stallone, apparently, has reached self-actualization for his entire gender.

Stallone realizes that his quest to pitch Rocky Balboa is directly parabolic to the character and plot of Rocky Balboa.

What are the odds!

So he’s trying to deliver this as half-subtly as possible so reporters can pick up on it and still feel creative. This is like the kid with huge hands trying to pass a note around class about the moody, fat substitute teacher. He’ll even reluctantly admit to this (“All of the Rocky’s are somewhat autobiographical,” he says), but the attempt, at least, is still pretty clever.

“Sometimes the pleasure is worth the pain.”

Stallone’s blip was dangerously close to flittering off-the-radar for a few years. Other than a stint in a Spy Kids movie — not exactly a career sustainer — his name hasn’t been tacked on a marquee since Driven or Get Carter about a half-decade ago. He was beginning to teeter on the brink of cultural irrelevance.

If you hadn’t noticed, well, he had. Because he was doing everything in his power to stop it.

And, with that, comes the much-publicized story of the creation of Rocky Balboa. You may have heard no one wanted to make this movie. This is partially true — one executive at MGM with a lot of pull didn’t want to make this movie because he figured Stallone would be pelted with jokes about his age. (Invariably, he was pelted with jokes about his age, but that’s besides the point.)

No one budged for seven years. Stallone became “very depressed.” And just when “it was a dead issue as ever,” he found a taker where he couldn’t have possibly looked for one.

“This is fate,” he recalls. “It was New Years Eve at a little restaurant in Mexico. This was 2004. Into the restaurant walks Joe Roth (of Revolution Films) and one of the producers who doesn’t want to make it. He asks me what I’ve been doing and I say, ‘Well, I’ve been writing Rocky.'”

Stallone wrote countless versions of this movie, each with different ways he could run up various different staircases in Philadelphia, different ways to give Rocky motivation, and entirely different endings.

After a give-and-take and a calendar switch, Stallone got a call from Joe Roth. This version stuck.

“I wanna make this film,” the producer said the next morning.

That’s right: Sylvester Stallone found the fountain of youth in a little Mexican restaurant outside of Cabo.

No wonder he wants you to write about the making of this thing.

But did he write this just to stay on the map? Did he go these great lengths and through all these hoops — these Mexican hoops — just to remain an A-list celebrity? Did he really just risk his legacy so that the last quarter of his life could be spent with people still quoting him?

Well, that’s not the party line. That party line is that Rocky V was horrible and he didn’t want to tarnish the series ending it like that.

He does, though, admit that you can’t breeze past the fact that he’s a sextuagenarian. Or the Spy Kids movie, for that matter.

“You have to address the age. You can’t just say, ‘Oh!'” he waves his arms, “and let them skip over it. You’re not what you are. The world has moved past you. Yes, I am archaic. I’m an anachronism.”

And, sure, it’s shameless. It’s low-brow. It’s probably even a little irresponsible to put such a respectable career on the line for this.

But it’s bold and it worked. Now, Stallone can make a final Rambo and follow through on his screenplay about the life of Edgar Allen Poe (really) without having to go through all of this hassle.

“He’s the most misunderstood person in the history of American literature,” Stallone says of Poe. “And I said, ‘misunderstood? That’s everybody.’

“I’ve written it. Now I’ve gotta decide, is it smart to do?”

So, to re-pose the question. Did he write the script just to stay on the map?

The following are facts: