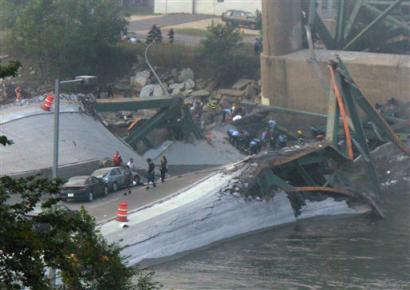 Because when we forget the universe reminds us. We
should all say a prayer for those involved in
yesterdays terrible bridge collapse in Minneapolis.
All of a sudden the Kevin Garnett trade is the least
of their worries as they try to figure out how many
lives have been lost and why the bridge collapsed in
the first place.

I was out at an album release party last night
and had no idea until I got home. I turned on espn
news and I noticed across the ticker that they were
saying that tomorrow’s game (today now) between the Twins and
Royals was canceled. I noticed it and thought maybe
it’s weather-related or maybe they are having some
electrical problems. It was only when I turned to CNN
that I found out the truth. I’ve been glued to it
since.

It’s a scary thought, one minute you’re riding along
and then the next the very ground you’re on
disappears. It’s the sort of thing that easily
resonates with all of us, since it’s a disaster that
really can happen anywhere. It was a major
thoroughfare; a downtown bridge that connects the
city’s major hub (including the Twins stadium and the
University of Minn) and it was rush hour. This is a
worst-case scenario and I hate to hear things such as
this.

Every few years something like this happens (Bay Area
earthquake in ’89, WTC bombing, Hurricane Katrina,
etc) and shocks us out of our monotonous daily routine
and sends us quickly back to reality. Yes we all get
through these things and part of the healing process
is not allowing yourself to be consumed. You have to
return to your regular life. And yes I get that
and I know there isn’t much I can do here in NYC, but
I empathize with the situation.

Now I’m not gonna sit here and get all sanctimonious
on you, it’s not even about that. It’s about what you
value and how you express that. We all get caught up
in the paper chase, especially here in NY where money
and the sheisty mentality it spawns is followed with
near religious fervor. We sometimes forget to
prioritize like we should.

I go through that sometimes
as well. I’m out here grinding and trying to better my
life and worrying about the next pair of hot sneakers
or whatever bs is going on at the time. The truth is,
real happiness is not about making money. Its about
having people in your life that you care about who
make life worth living. It’s the reason why you go
to work, why you decide to start your own business
the reason why you try to get your life together. In the
hopes that you’ll be able to contribute to your own
happiness and the happiness of
others.The sad thing about it is when tragedies
happen the only thing you think about
is what you should have been thinking about all along.
But sometimes it’s too late.