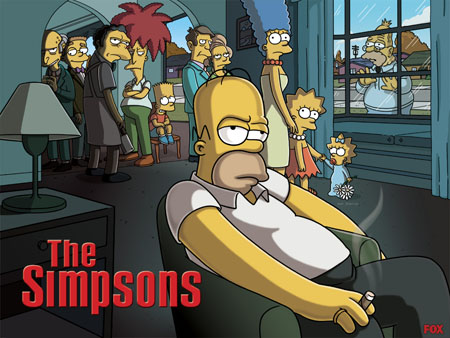 Yes it is FRI-DAY! You may not know this, but The Simpsons movie is coming out tonight. You definitely do not know this, but for a 10 year stretch, The Simpsons was engaged in a Russell–Wilt rivalry with Married With Children for the coveted title of “Sam Rubenstein’s favorite T.V. show.” (Seinfeld would later enter the equation and complicate things. It was a vicious love triangle.) Did I have a Bart Simpson t-shirt that was confiscated by my mom? Yes. Did I write about The Simpsons for one of my SAT II essays? Of course. Do I keep my face bearded just so I look like Groundskeeper Willie? Why would I ask the question if the answer wasn’t yes. I love The Simpsons. Or, if you need me to color it with a Hip Hop reference, I used to love the S.I.M.P.S.O.N.S.

I am no different from most Simpson fans. The majority of us recognized the comedic brilliance from day one, and were fiercely loyal to a point. Then it started to get too… the best way to put it is that it became a caricature of itself, and yes in this case it is bad for a cartoon to be a caricature. Homer went from lovably stupid to just flat out mean. Bart went from mischevious to annoying. They kept forcing guest appearances and modern references into the show, and it just wasn’t funny. As Homer would say while banging on the TV set “Come on! Be more funny!” Of course it kept going and going year after year, and until last Friday I had not watched an episode in 6 or 7 years.

Here is where I take it back to NBA relevance, sort of. Last Friday, I was on a plane flight to California and the only thing working on the in-flight TV was a loop of Simpsons episodes, some from the golden age (Homer becomes an astronaut) and some that I had never seen before in the days since the golden age (Marge and Mo are partners at Mo’s fancied up establishment). Watching all of those episodes put a big smile on my face. Then right as the plane landed the TV news kicked in and said “NBA ref gambled…” you know, that whole thing. In these depressingly negative times, I am thankful for something like The Simpsons which has provided so much joy over the years.

While I have failed miserably in my mission to see The Transformers movie (because dudes have grad school after work or girlfriends with no respect for cinema), I find myself once again saying “I must see this movie!” Expectations are not high, but I turn to a quote from Homer when he was performing at the Mr. Burns birthday/roast “DO YOU WANT TO LAUGH?!?” I do, Homer. I do. The recent events of the sporting world can drive that out of you, but really as the cliche goes, laughter is the best medicine.

Okay, so it’s a slow day. I’ll take a slow summer day over another depressing scandal though.