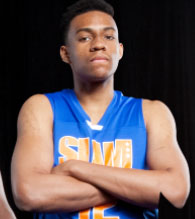 The wait is over. One of the most highly touted high school basketball players in recent memory, Jabari Parker, announced this afternoon he will be attending Duke University next fall. The 6-8 small forward was also considering Michigan State, Florida, BYU and Stanford. Look out for an exclusive interview with the man of the hour in a few. From ESPN: “Jabari Parker, the nation’s No. 2 senior, committed to Duke during a press conference at his school on Thursday. Parker, a 6-foot-8 forward from Simeon Career Academy, chose the Blue Devils over BYU, Florida, Michigan State and Stanford. Hats representing all five schools were situated on a table in the Simeon gym, which was filled with teammates, students and the media. Duke coach Mike Krzyzewski has had good luck with recruits in his native Chicago. He also landed Jon Scheyer (Glenbrook North), Sean Dockery (Julian), Michael Thompson (Providence) and Corey Maggette (Fenwick) from the area. Parker is Simeon’s biggest recruit since Derrick Rose, who was ranked No. 5 in the Class of 2007 and attended Memphis before becoming the No. 1 overall pick by the Chicago Bulls. Nick Anderson, Bobby Simmons and Ben Wilson are also among the players who have attended Simeon. Parker’s recruitment was kept in a tight circle. Only Parker’s father Sonny Parker, a former NBA player, his mother Lola Parker and Simeon coach Robert Smith handled his recruitment. College coaches weren’t even allowed to have Parker’s cell phone number. They had to go through his parents to talk to him.”