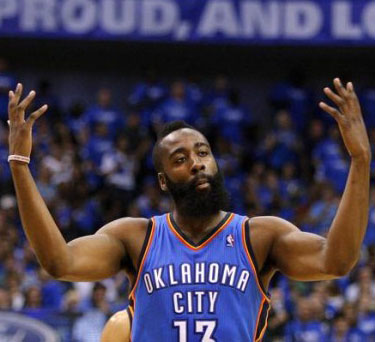 Well, that ends the James Harden-OKC Thunder max contract drama. The Thunder have shipped Harden to the Houston Rockets in exchange for Jeremy Lamb, Kevin Martin and future Draft considerations. Yahoo! has the report: “The Oklahoma City Thunder have traded  James Harden to the Houston Rockets after they were unable to agree to a contract extension with the star guard, league sources told Yahoo! Sports. The Rockets sent Kevin Martin, Jeremy Lamb and future draft considerations to the Thunder for Harden, sources told Y! Sports. Along with Harden, the Thunder will send Cole Aldridge, Lazar Hayward and Daequan Cook to the Rockets. Houston also sent two 2013 first-round picks (from Dallas and Toronto) to Oklahoma City, sources told Y! Sports, as well as a 2013 second-round pick (via Charlotte). The first-round picks have varying degrees of protection on them, but the one from Toronto is assured of being in the lottery whenever it is relayed to the Thunder. Contract extension talks between the Thunder and Harden broke down, and Thunder general manger Sam Presti moved quickly to trade the guard. Harden rejected a four-year offer that would have paid him a base salary of $53 million to $54 million, league sources said. That offer would have pushed OKC’s payroll to $95 million, and Thunder officials weren’t willing to go any higher.”