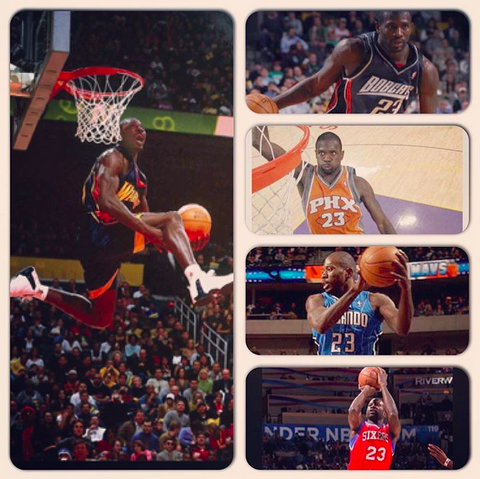 After sitting out the entire 2013-14 campaign due to knee and foot injuries, J-Rich appeared in 19 games for the Philadelphia Sixers last season. (He inked a non-guaranteed deal with the Atlanta Hawks last month.)

“Today is a bitter sweet moment for me. I’m officially announcing my retirement from pro basketball. I like to thank the organizations and fans in Charlotte, Phoenix, Orlando, Philly and especially The Bay Area for their loyal support the past 14 years. Walking away was the hardest decision I had to make but choosing my health and spending time with my family is more important to me! God bless!”

Richardson broke down his decision to retire with Yahoo! Sports:

“I didn’t want to limp the rest of my life,” Richardson said. “I still have my whole life in front of me, God willing. I sat alone at a park in Atlanta thinking and no one said anything to me because they didn’t recognize me since I just got there. I talked to my wife for an hour on the phone and then I sat for five hours thinking while listening to music before deciding that retiring was the right thing to do.”

The Golden State Warriors selected Richardson with the fifth overall pick in the 2001 NBA draft out of Michigan State. He averaged 18.3 points with the Warriors from 2001-07, including a career-high 23.2 points during the 2005-06 season. He also played for the Charlotte Bobcats, Phoenix Suns, Orlando Magic and Philadelphia 76ers from 2007-15. Injuries caused him to miss the 2013-14 season and play in just 52 games the past three seasons combined.

While Richardson scored 14,644 points during his NBA career, he believes he will be most remembered for his dunking that included his signature windmill 360-degree slam. […] “The dunk contests are what people know me for,” Richardson said. “I played on teams with Golden State that I was scoring 17 to 18 points a game on, but we weren’t winning. So I will always be known for the dunk.”