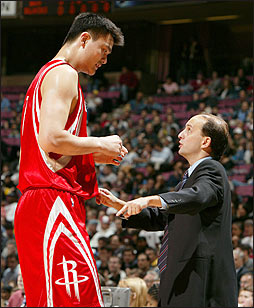 It wasn’t surprising that Yao Ming finally decided to call it quits; the signs that his playing days were over had been there for quite some time now.

According to his agent, there will be a press conference on July 20th to presumably make the retirement official.

Yao Ming only played for eight years in the NBA, but he left an indelible mark on the League, and his impact on the game of basketball globally is enormous. Injuries are to blame for his tragically short stint in the NBA — they started cutting Yao’s career short in just his fourth season (Ming played an average of 81 games per year through his first 3 seasons in the L.)

The towering center with a deft touch around the rim and from outside the paint, put up averages of 19 points, 9 boards and shot 52% from the field for his career, and when you combine that with everything else he accomplished off the court, Yao Ming’s former Houton Rockets head coach Jeff Van Gundy says that’s more than enough to warrant a Hall of Fame berth.

“No. 1 to me, he’s a Hall of Famer,” Van Gundy said. “I don’t care if you put him in as player, as a contributor or put him in with his own heading. This guy definitely gets in for the greatness as a player when healthy or what he did as ambassador.”

He then added a thought he would repeat often. “People forget,” Van Gundy said, “just how good he was.” With Yao’s decision to retire rather than attempt another comeback from another injury, discussions about his career always will include thoughts of what could have been.

Strictly based on the merits of what he did on the court, you could legitimately argue that Yao Ming is not a Hall of Famer.

But good luck pushing that argument any further when you take into account the totality of his accomplishments and impact on the game across the globe.