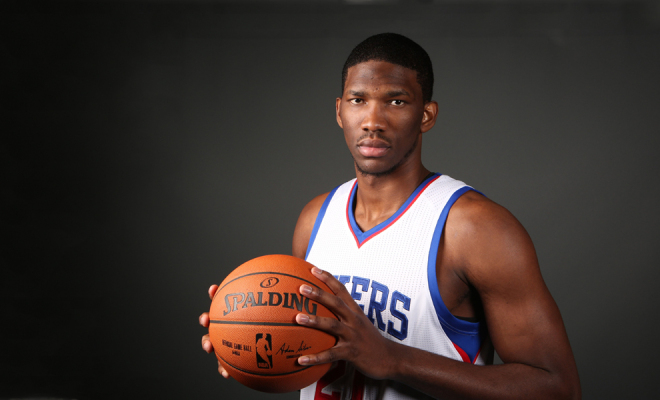 According to multiple reports out of Philadelphia, Sixers rookie big man was spotted in a walking boot following a minor setback in the rehab from a stress fracture in his right foot.

Embiid, the third overall pick in last June’s NBA Draft, had been showing encouraging signs of friskiness in recent workouts.

The Sixers envision Embiid and fellow rook Nerlens Noel forming a dominant inside presence next season.

Rookie center Joel Embiid experienced a “minor setback” during the rehab of the stress fracture in his right foot, according to an NBA source. […] Some folks saw Embiid in public Sunday wearing a protective boot, which he apparently hadn’t sported in weeks, on the foot.

CSNPhilly.com’s Dei Lynam, citing a “league source close to Embiid,” said Embiid is scheduled for a checkup with his doctor Tuesday in Los Angeles. […] Embiid, who is expected to sit out the 76ers’ entire 2014-15 campaign (only 19 games remain), had been doing more drills at better than half-speed during recent workouts and opened some eyes with a between-the-legs dunk during the layup line prior to Friday’s home loss to the Jazz.

That resulted in coach Brett Brown saying he would “recommend strongly” that Embiid refrain from a repeat performance.