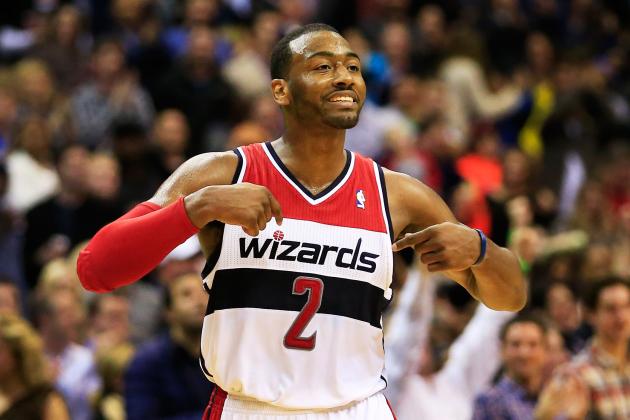 Wizards superstar PG John Wall is making his first-ever All-Star Game start, in his second consecutive season playing in the game. And while some players would be satisfied with that, Wall is looking not only to show up, but to show out. He reportedly wants to break Magic Johnson’s single game record for assists in an All-Star Game (22, set back in 1984). That’s according to CSN Washington.

Yep, Wall wants to drop 23 dimes on Sunday at MSG. Before you go thinking that’s crazy talk, remember that Wall dropped 22 assists in 29 minutes at the 2011 Rising Stars Challenge.

Wizards point guard John Wall talked openly early in the season about the possibility of leading the NBA in assists.

“There’s different goals you want to set, and me just getting my teammates involved and letting those guys get going, I definitely feel like I can lead the league in assists,” Wall told Comcast SportsNet’s Chris Miller in November.

More than halfway through the season, Wall leads the league with 10.2 assists per game. He had 10 assists and 10 rebounds in Monday’s win over Orlando, missing his first triple-double of the season by one point.

With the all-star break approaching, Miller asked Wall, who was presented his all-star jersey by Wizards owner Ted Leonsis before Monday’s game, about his goals as the East’s starting point guard for Sunday’s spectacle at Madison Square Garden.

“John wants to break Magic Johnson’s all-star record with 22 assists,” Miller reported during Monday’s broadcast. “You might recall his rookie year, in the rookie-sophomore game, he had over 20 [assists] in that game. He doesn’t care if he scores.”

Wall had 22 assists in 29 minutes to win MVP honors in the 2011 Rising Stars Challenge at the 2011 All-Star Game, the annual exhibition featuring rookie and second-year players.

“Considering that generally you see matador defense in the all-star game, he’s got a good chance, depending on how many minutes he plays,” Steve Buckhantz said Monday.

Johnson set the record of 22 assists in the 1984 All-Star Game, playing 37 minutes in a game that went to overtime. Johnson is responsible for three of the top four assist totals in all-star game history. Clippers point guard Chris Paul had 15 assists in the 2013 All-Star Game, which is tied for the fifth-most all-time.