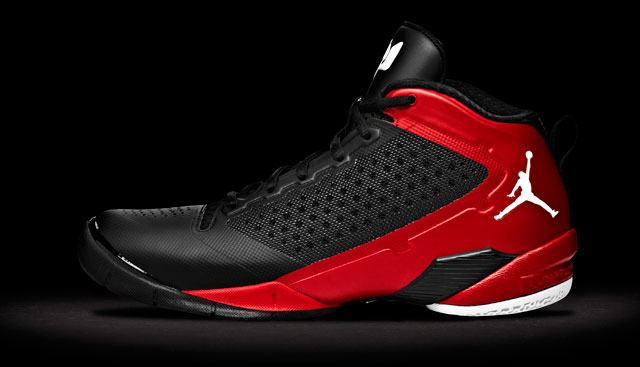 MIAMI — After having over six months off from his official NBA duties, Dwyane Wade spent this morning reminding people that he’s ready to get back on the court. And with the new Jordan Fly Wade 2, he feels like he’s got the perfect new shoes to do it.

Wade hosted a casual press conference earlier today at Jose Marti Park on the edge of Little Havana, tucked just beneath the highway, tight alongside the water. He talked about plenty of things, from fashion week in Milan to how the Heat will approach this season, but it started with the kicks.

The Fly Wade 2 is unbelievably light, weighing just 12 ounces, and was created using Hyperfuse technology, which is more about function than it is about fashion. According to Wade, he sweats so much that his shoes have traditionally broken down quickly; at times, he’s gone through as many as three pairs of shoes in one game.

“Which is crazy,” said Jordan Brand creative director Andre Doxey. ”As D said, the shoe would literally break down. He was one of the hardest players in the game, and the shoes were literally not holding up. So, this upper is using Hyperfuse technology, so what it does it give you this great fitted upper, and it doesn’t break down under the stress of playing. And it’s lighter, and it’s breathable. So we really tried to solve the problem he was having with his other shoes, which were leather or a combination of leather and other materials. That’s why we went with this Hyperfuse.”

The shoe sits somewhere between a high- and low-top. “A lot of guys wear different shoes,” Wade said. “I’m kind of a mid. I want protection in my ankle area, but also I want freedom as well. So it’s trying to come between that fine line of how do you get it where you have protection on the ankle, but it’s not too tight, not too snug.”

“If you notice the collar, the collar is asymmetrical,” Doxey noted. “It really reflects D’s foot morphology or anatomy. He really wanted to make sure he enough range of motion, so we really sweat the detail, to make sure this didn’t hit his anklebone the wrong way. I mean, we changed this thing fix, six times. We sent it to D and he’d say it was not right yet.”

From a style standpoint, Wade had to look only as far as his garage.

“We sat down to talk and he said ‘Aston Martin,’” Doxey recalled, “and I said, ‘Aston Martin, seriously? You just made my job a lot easier.’”

“Whatever you’re going through at that time in your life is kind of the look you want on your sneaker,” Wade explained. “For me, as a man, it was about cars. So we sit down and we talk about what car you’re driving, what car do you like, what colors do you like. If you look at these shoes, you’ll see a lot of matte finish, and right now you see a lot cars that have matte black, matte white. So that was kind of the thing that I sat down and talked with when I talked with designers about how I wanted the Fly Wade 2 to look.”

“When I sit down and go into the lab with what car I want or how I want my car to look, I always come back to sleek. I’m just a person who likes clean. I like Aston Martins, how clean they are, how sleek they are. You think about the front of an Aston-Martin, how it is shaped. So I always come back to that, because I like clean and sleek. And I wanted some matte, because matte is what’s hot right now. So I wanted some matte with the colors throughout the year in my shoes, and you see it’s on different shoes in different places, which I thought would be hip, thought it would be cool, to have that on my sneakers as well as on my cars, two of the most important things for me.”

Wade also said that while he wanted to stay current, he also tried to balance that against the need for a performance that works for him: “The Jordan team is always trying to figure out what’s next, get in the kitchen and come up with something with our own tweaks. Like me, I’m different, and I use different things in my shoes that other people don’t use. You see a lot of people use Flywire now, but that doesn’t work for me right now. So you try to stay current, you try to stay with the times, but also you try to stay true to who you are and where you come from as well.”

The first two colorways of the Fly Wade 2 will be available in the U.S. today, Wednesday, December 7, for a suggested retail price of $140. Additionally, a white/varsity red-black colorway will release in January 2012, with the final black/white colorway dropping in March 2012.

Opening against the Mavericks:

“That’s the last team we played, that’ll be the first team we play this year. We’re fine with it. It’s going to be great for everyone to get back to the game of basketball.“

How he spent the lockout:

“I stayed pretty busy. I did a lot of things. Obviously, understanding there was a possible lockout, this was an opportunity to do a lot of things we don’t normally do. A week after the Finals, I had already kind of committed to going to Milan and Paris for fashion week. They had to drag me out of the house, but once I got over there, it put me in a different world, in a sense, and it took me away from basketball. It was kind of therapy for me in a sense. Then after that I just continued to broaden my horizons a bit. Went to China, spent two weeks in China. Went to Australia, just different places. From the aspect of building my brand, got to do things I’m normally not able to do, then also in my personal life, spent a lot of time with my kids and people that I wanted to, which I haven’t been able to do. Which was kind of cool.”

Returning for the new season:

His motivation for this season:

“I’m always hungry—win a championship, lose a championship, I stay the same. Every night I play the game of basketball, I play it to win. I’m not always going to perform great, but I always perform with that same hunger. Win, lose or draw, I’m coming in the next day with that same mind state. Obviously, losing you always want to come back the next time and do it better. Losing the Finals hurts, but if we had won last year, you still have to come back the same. The Dallas Mavericks are not going to come back with a different mindset, they want to win again. You’ve got to move on from whatever happens. Every season is different, and we gotta approach that this year is a different year.”