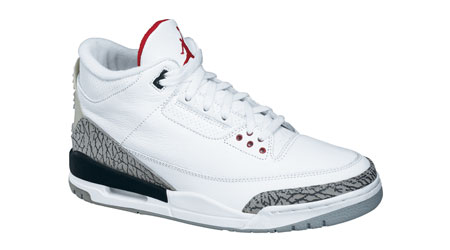 Certain partnerships are unbelievable from the start. Magic and Kareem. Eric B. and Rakim. Jerry Bruckheimer and Don Simpson. The same can be said for Tinker Hatfield and Michael Jordan.
By 1987, the relationship between Michael Jordan and Nike was anything but perfect. Jordan had wanted to sign with another brand so Nike turned to a young designer named Tinker Hatfield to work on the III. Hatfield had initially joined the company as a corporate architect, but had by then made a huge splash in footwear with the Air Max and Air Revolution projects. He had a different approach to design, one that involved the athlete more than ever before.
The III, a mid-cut shoe with elephant print accents and Visible Air in the heel (and a new logo—a silhouette of Jordan dunking that became known as the Jumpman), was the first Hatfield/Jordan collaboration. It saved Nike’s relationship with Jordan. And, perhaps in appreciation, Jordan won another dunk contest. And the Defensive Player of the Year. And the MVP.