Jose Calderon Out 2-3 Weeks Due to Right Calf Strain 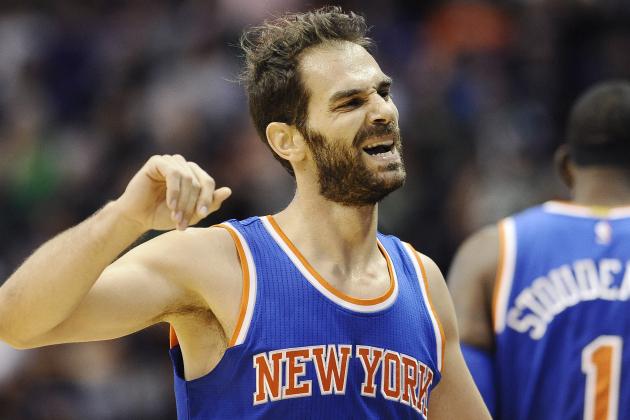 The New York Knicks announced Thursday that veteran point guard Jose Calderon will be sidelined for 2-3 weeks, as he recovers from a right calf strain:

An MRI to Jose Calderon's right calf today confirmed a strain. He is expected to miss 2-3 weeks.

The injury occurred in a pregame workout Wednesday, according to Knicks head coach Derek Fisher.

Two hours before the 24-point opening-night loss to the Bulls, Fisher said Calderon, who had missed the last two preseason games with the calf issue, would start against Chicago. Less than an hour before tipoff, the Knicks announced he was out.

The current time frame would lead to Calderon missing another seven to 11 games. Second-year pro Shane Larkin started in Calderon’s place for the second straight night.

“We would love to have him,” Fisher said. “He’s been a fantastic presence not just with his steady poise and composure but his grasp of what we’re doing offensively, really well. So we’ll miss him, but it just gives us a chance to develop some guys that we need to develop that are going to be key to our success. […] Hopefully, in a few weeks we’ll have Jose back and we’ll be stronger at that position because of the opportunity some of those other guys are going to get.”