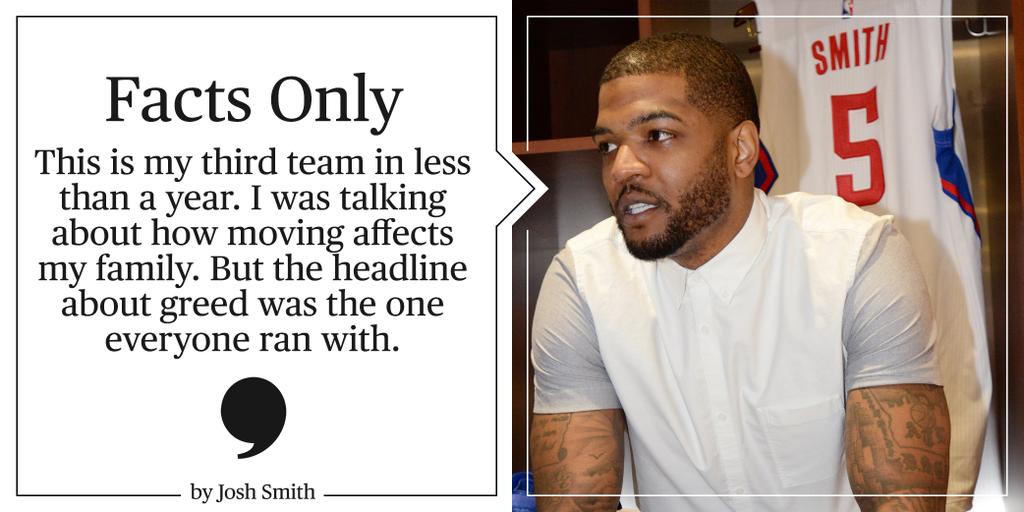 LA Clippers forward Josh Smith recently drew the ire of the sports world by claiming that the major paycut he took in free agency would be “a little harder on me this year.”

Smith, in a piece for The Players’ Tribune, explains that what he meant to express was that he was concerned about the instability a one-year deal would create for his family.

The 29-year-old forward has earned over $90 million during his 11-year NBA career:

Apparently the headline was: Josh Smith went to the Clippers press conference and said he didn’t make enough money? Even the idea of it is kind of ridiculous. Anyone who knows me, or knows how one-year contracts work in the NBA, understood what I was saying. This is my third team in less than a year. I was talking about how moving affects my family. But the headline about greed was the one everyone ran with.

Let’s just look at what I actually said so we don’t get it twisted. This is the quote people shared: […] “It wasn’t about the money because of the Detroit situation, but at the end of the day, I do have a family, so it is going to be a little harder on me this year. But I’m going to push through it and try to do something long-term after this year.”

The whole thing about it being “harder on me” comes down to family. It seems obvious to me, but maybe I could have said it more clearly. If you know the NBA, you know that moving to a new team is a decision that affects an athlete’s whole family. That’s even more true when you’re signing a one-year deal. With a one-year deal, there’s less stability because you know you might be moving again in a year. […] When I was waived from Detroit this year, it meant I had to move to Houston in the middle of the year. Like any parent, you think about how your work affects your kids. You want consistency for your kids — consistent teachers, consistent friends, a consistent home. You want some normalcy for them. I wanted to go to the Clippers (that’s a business decision), but I also wanted to be sensitive to how it affected my kids (that’s a personal one). I can tell you that the conversations this offseason between me and my wife were more about where they’d go to school than about finances.