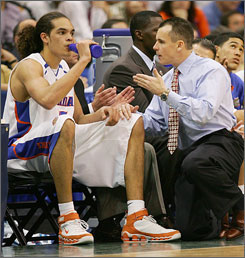 Take everything you’ve ever heard about college coaches going to the NBA, ball it up like a mess of paper and throw it away. Let it be forever dispelled from your memory. That knowledge is of no use to anyone anywhere.

Too circumstantial. The evidence too shaky. Too little proof–with the usually underdeveloped players these poor (well, wealthy, but let’s not get into that) coaches have to maneuver under the guise of “rebuilding,”– that this moribund, lame-duck existence of a college-turned-pro coach is any fault of their own.

Tim Floyd coached the Baby Bulls, who were all probably younger than any player he had at Iowa State at any time. PJ Carlesimo had Latrell Sprewell and nothing screams job security like management breathing down a choking neck. Lon Kruger, Mike Montgomery, Reggie Theus… it’s all the same. Even if you’re Phil Jackson, you can’t coach, say, an injury depleted 2005-2006 Warriors team spearheaded by Mike “Hold On, Give Me Four More Years to Find My Position” Dunleavy Jr. and expect to make the playoffs.

Oh, and Kevin McHale is not walking through that door.

Let’s assume Billy Donovan is not like the rest of them. History means nothing now, OK?

Good. Billy Donovan still won’t make it in the NBA.

Even if it is all sheerly coincidental that all of these previously successful coaches failed in their transition into the NBA (it isn’t) and even if Billy Donovan was a considerably better college coach than Rick Pitino and John Calipari (he isn’t) who tried and rolled over before him, this has nothing to do with college.

They read like words off of one of those self-help posters that are plastered all over the walls of doctors offices, followed with some overused proverb, so this is probably why it won’t be brought up enough in the next couple of months. But those words–“motivation,” “commitment”–are not deeply ingrained into the NBA psyche. Some players barely know what it is.

So when you look back to the start of Donovan’s repeat Championship attempt, and you file through the first few games of his 2006 season, you see this: hiccups everywhere; a hangover almost unsalvageable.

A loss to Kansas, 82-80. A loss to their only other non-mid-major opponent, Florida State, two games later.

This may come off as someone who looks too deeply into box scores, someone who remembers too much negative of a remarkably positive season overall, but Gainesville was wondering if this team had any gall whatsoever until 43 days after their opener last year — December 23rd, when they broke out against Ohio State in a precursor to an eventual NCAA Final.

Al Horford was unusually undisciplined, fouling out in the first two big games of the season. Billy Donovan couldn’t get Joakim Noah–a guy who screams at his cereal every morning because it cuts up the roof of his mouth, I’m convinced–motivated until well after those 43 days.

If it took almost two months to get a college basketball team of best friends who came back to school to win another championship to stop cruising, especially one with a cast of bangers and hustle players, how long is it going to take to get a bunch of NBA players to do the same?

And, after leaving a team (for the money, no less) that just gave you national recognition for the genius of a coach who was graced with four pro players for two years, how are they to rely on you? How are they to assume you’re committed? How is the future of this league Dwight Howard and his nifty point guard sidekick Jameer Nelson ever to put their faith into someone who might leave again for another hefty sum if his team goes through another rough 43 days? Or worse, someone who will leave if they start winning.

Even if you throw every piece of history out the window, how are the Orlando Magic supposed to figure out that you’re not like the rest of them?

Because no one in the state of Florida can take your word for it anymore.