The Jayhawks get a head-start on the Class of 2019. 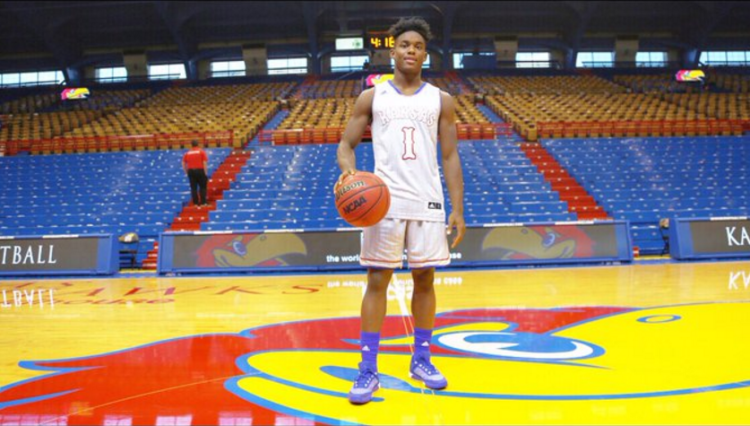 Although only a sophomore, visiting campus over the weekend while the program held its annual Late Night in the Phog celebration was all Markese Jacobs needed to see to make his college decision. On Sunday, the 5-11 point guard out of Uplift High in Chicago announced his decision to commit to the Jayhawks via Twitter.

More from the Kansas City Star:

Markese Jacobs, a 5-foot-11 sophomore guard from Uplift Community High in Chicago, who orally committed to Kansas on Sunday, reminds some basketball recruiting experts of a former KU standout from the Windy City.

“I train with Sherron Collins all the time. That’s who they compare me to. They say I’m another Sherron,” the 170-pound Jacobs said Sunday afternoon in a phone interview.

Jacobs, of course, was referring to the No. 5-leading scorer and No. 8 assist man in KU history.

“I committed to KU because they love their guards. It’s all about their guards. I like how the coaches put the trust into the guards,” said Jacobs, who attended Saturday’s Late Night in the Phog on an unofficial recruiting visit. “I feel I fit that. I want to be the leader of the team. Getting an opportunity to play at the University of Kansas doesn’t come every day. It’s not a normal opportunity. It’s one you’ve got to take advantage of.”

He definitely has the endorsement of Collins, one of KU’s all-time greats.

“I worked out with him a lot this summer. He’s good, but he’s so young,” Collins said Sunday in a phone interview from his hometown. “His ceiling is so high. The things he can do … you say, ‘Wow.’ And he’s got two more years to get better. He can be great, another tough Chicago guard,” Collins added.