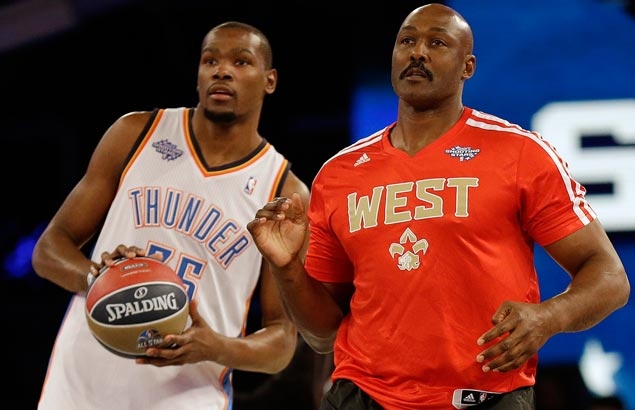 OKC Thunder superstar Kevin Durant reveals that, after particularly rough nights on the court, he’s been getting support from Hall of Famer Karl Malone.

The reigning NBA MVP tells Esquire that he also tries to be a mentor to younger players:

”I’ve gotten close with Karl Malone, who’s called me numerous times when he can see on TV that I’m struggling, feeling bad after a loss. He can tell.”

”I try to talk to the younger guys. I don’t want to force myself on anybody, so if somebody asks me for some advice, I just try to give it to them as real as I can. Especially high school kids, who are about to enter into this life. I’ve been through so much, even though I’m twenty-five years old, that I can spread some knowledge. And, you know, it feels great just to know that you’re helping, and know that the experiences you’ve been through, even though they were tough, that you can help someone else try to prevent those. Just another voice in the air, to help.”