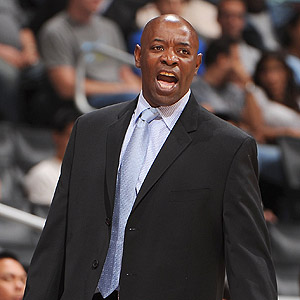 After restructuring their roster and taking a step back in 2010, the Golden State Warriors improved by only ten wins this season. As a result, Keith Smart is on his way out. The Warriors announced their decision this morning:

“It’s never easy to make difficult decisions, especially when it involves someone that we have a great deal of respect for like Keith Smart,’ said Warriors Owner Joe Lacob.  ‘After meeting extensively with Larry Riley and Bob Myers, we came to the conclusion that a change was necessary at this particular time.  I think Keith did an admirable job this season and he should be commended for many of the positive things that transpired both on and off the floor.  The team showed improvement and their effort was never in question.  However, we’ve elected to pursue a new path and we wish Keith the very best.  He’s a quality person and we thank him for the time he invested with our organization.’”

Smart seemed to sense the writing on a the wall at the beginning of the month, stating:

“I would say that anywhere else, other than right here, people would look at it and say it was a good season,’ Smart said before Sunday’s game against Sacramento. ‘I’ve done everything I could possibly do, and for some strange reason, people (don’t recognize it). Anywhere else in the country, people would say we are moving in the right direction.’”

Smart’s contract for next season was only partially guaranteed, and since majority owner Joe Lacob was not in power when the decision was made to replace Don Nelson with Smart, the move doesn’t come as a total surprise.

It’s been awhile since the Warriors were the most exciting team in the world, but if their young core continues to develop there soon could be reason to believe once again.