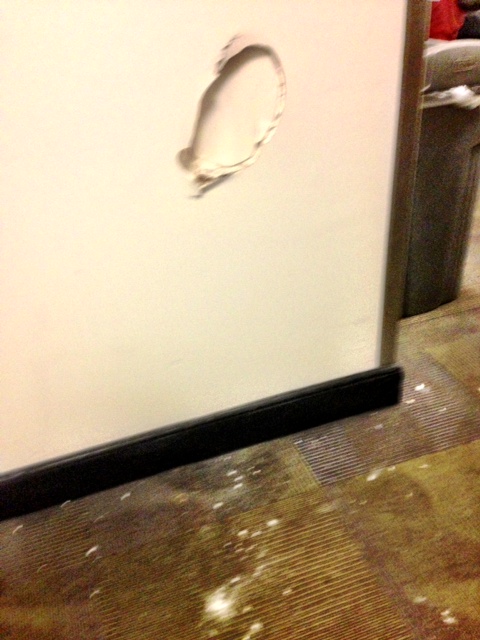 Bringing back memories of Amar’e Stoudemire’s violent (and stupid) reaction to a gut-wrenching Playoff defeat last season, Kenneth Faried kicked a large hole through a wall in the Denver Nuggets’ locker room last night. Per the Denver Post: “‘I hate losing with a passion. I hate losing more than I like winning,’ forward Kenneth Faried said after Denver lost game Game 4 at Golden State. And so, when Faried headed into the locker room after falling behind 3-1, he kicked a hole in the drywall. Asked if he used his injured left foot or his right foot to kick the hole, Faried said, ‘I don’t know, I just kicked it, I was mad.’ (Faried is right-handed, so one would assume he’s also right-footed.) He is playing on the injured left ankle, and in Game 4, he finished with eight points and 12 rebounds (three offensive), but clearly there were times where he didn’t have his normal hops, losing out to lesser rebounders. ‘I’m banged up. I’m not the Faried of old,’ he said. ‘I have to get my ankle better. I can’t do some of the things I want to do. … It hurts, but I’m fine. If I decide to be out there, I decide to be out there. I feel as though my teammates need me, so that’s why I’m out there playing my tail off.'”