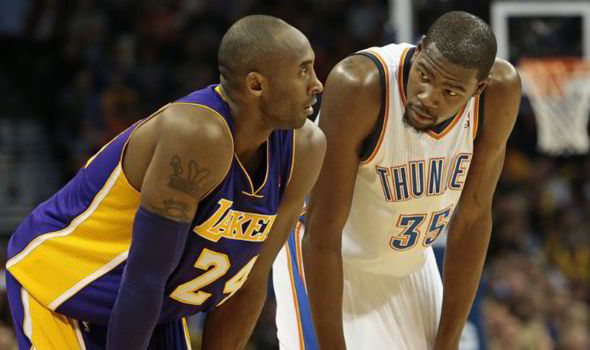 Kobe Bryant’s retirement announcement sent shockwaves around the NBA last night, with players and coaches weighing in with their appreciation for The Black Mamba’s remarkable 20-year career.

Kevin Durant joined the chorus Monday, but added that he had a bone to pick with the media and their treatment of Kobe and his ongoing struggles this season.

Kevin Durant on the criticism of Kobe: "You guys treated one of our legends like sh** and I didn't really like it" pic.twitter.com/Nza1C0ey0E

It’s not the first time KD has blasted the press and their work.

Durant should pay closer attention to Bryant’s own self-criticism, which has been far harsher than anything reporters and bloggers could muster.

What can you remember about your first time playing against him? […] Durant: “I can remember him shooting 44 times my rookie year on a back-to-back. Had 48 points on us. That was one of my first memories. They still didn’t have Pau (Gasol) and they were struggling a little bit. But the look in his eye never changed. Definitely gonna miss him. I hate that we’re gonna finally talk good about him when he’s gone, but these years that we had him, everybody was happy that he wasn’t shooting the ball like he wanted to or they lost or whenever he made a mistake, we were worried about that instead of appreciating the greatness.”

What is his legacy? […] Durant: “We compare a lot, but I don’t want to do that. In my era, the greatest player to ever play the game. Just has countless moments of greatness. Gonna be different not competing against him. Gonna be different going into Staples Center and not seeing 24. We just gotta enjoy him right here the rest of the season, respect him and know that he did all he could do for the game of basketball. As long as he’s going out peaceful and on his terms, couldn’t ask for a better ending.”

(Russell) Westbrook: “It’s crazy man. Me growing up in L.A., being able to watch Kobe, he was one of the guys I looked up to. Crazy to see him hang it up. Obviously he was one of the greatest players to play the game and somebody I learned a lot from. His demeanor, his attitude, his competitive nature, it’s gonna be crazy to not see him on the floor. Throughout this season, I want to get an opportunity to thank him for what he did for the game of basketball. Just for me, being a kid in L.A., it was good for me.” […] You talk about learning from him, I know we’ve talked about some of the post moves you took from him. What else have you learned? Westbrook: “A lot of things. Mindset. Having that killer instinct. I think a lot of players take that for granted, especially coming from him and him being able to have that killer instinct. It made him a better player, the player he is today.”