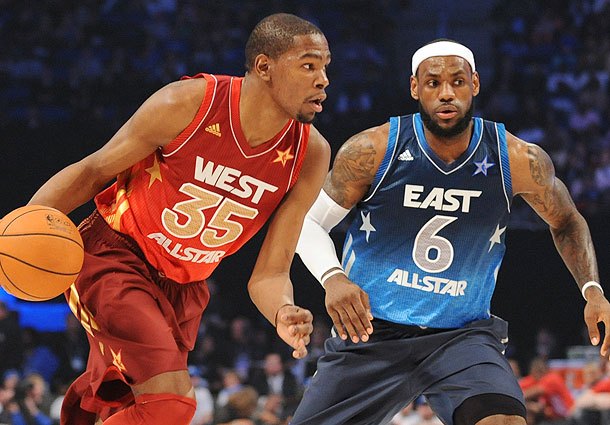 The NBA’s reigning MVP, Kevin Durant, was asked for his reaction to the L’s new $24 billion TV rights agreement. As one of the people who stands to benefit the most from the influx of cash, Durant views the mega-deal as a positive.

KD says players should be able to use the deal in their labor negotiations with team owners, and breaks down how the NBA’s biggest stars aren’t being paid what they’re worth.

“It should be,” Durant said [about the TV deal being a potential bargaining chip should there be another lockout after the 2016-17 season.]. “Everybody seen (the new deal). Last year, the fans didn’t really get to know exactly what was going on as far as revenue. But now that it’s out there, feels like we have a little bit of leverage, I guess, as players.”

“Look at it like this,” Durant explained. “Kobe Bryant brings in a lot of money to Los Angeles, that downtown area. People go to watch the Lakers. Clippers are getting up there, Chris Paul, Blake Griffin and those guys are bringing in a lot of money as well. Look at Cleveland, look at Miami when LeBron was there. These guys are worth more than what they are making because of the amount of money they bring to that area. That’s a conversation you can always have, but until it’s changed you never know what will happen to it.”

Related:
LeBron James on Owners Crying Poor: ‘That Will Not Fly With Us This Time’
Deron Williams: ‘I Hope Guys are Preparing for an NBA Lockout’