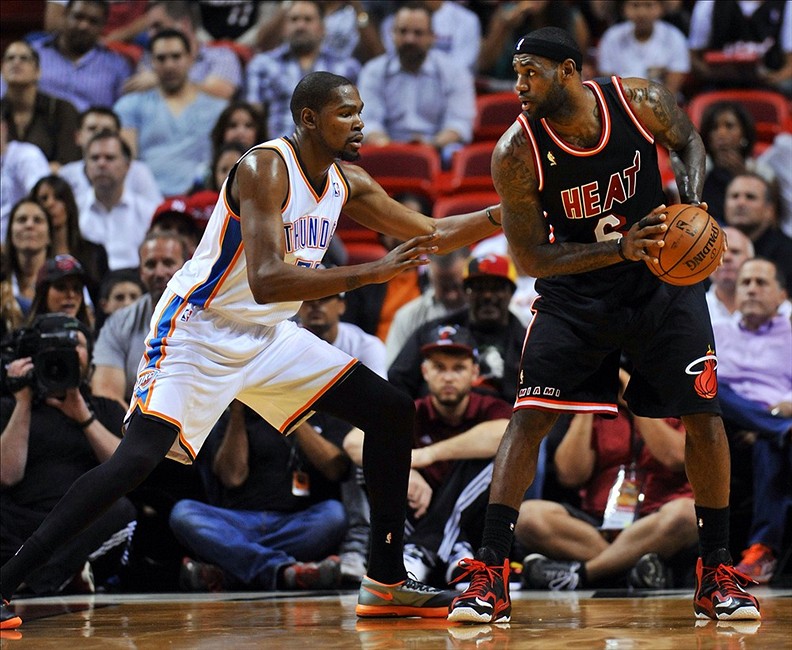 The film explores Durant’s controversial decision to withdraw from Team USA this past summer – KD cites a fear of injury after Paul George went down gruesomely, and general fatigue.

In one scene, Durant is shown watching the San Antonio Spurs demolish the Miami Heat in the NBA Finals, and the reigning NBA MVP accurately predicts that his good friend LeBron James would bolt from South Beach.

His family, friends and representatives all understood and supported Durant but the hard part was going to be backing out and letting down the people – like [Mike] Krzyzewski – who expected him to play a leadership role in the pursuit of another international gold medal. A few days before he reached out to Krzyzewski, Durant watched Indiana Pacers forward Paul George break his right leg in a horrific collision with a basket stanchion during a Team USA basketball scrimmage in Las Vegas that convinced the reigning NBA MVP to withdraw from the FIBA World Cup. […] “It took everything out of me seeing that,” Durant later told friend Randy Williams and a Nike executive at his camp of George. “Everything I had to play for Team USA, that injury stripped it away from me.”]

During one scene, Durant’s agent, Rich Kleiman of Roc Nation Sports, gets upset after a reporter violated terms of an interview agreement and mistakenly asked Durant about becoming a free agent next summer. Durant politely corrects the reporter and tells her that he is actually signed for two more years with the Thunder and isn’t thinking beyond that.

Durant, however, does appear to predict the future for LeBron James while watching the Spurs clobber the Miami Heat in five games in the NBA Finals. […] “LeBron is gone if they lose this series, dog,” Durant shouts at his television to no one in particular.