Kevin Durant Will Miss ‘At Least One Week’ With Foot Soreness 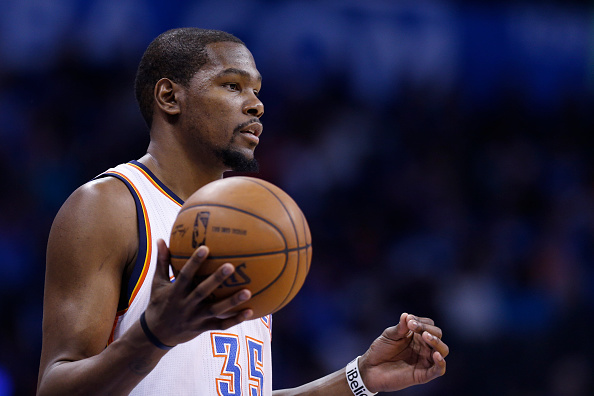 Kevin Durant will miss at least a week of action while resting a sore right foot. KD had surgery in October to repair a fracture, and it’s still causing him some pain, apparently. Still, OKC expects the MVP to play again this season. He’ll be re-evaluated in a week. From ESPN‘s Royce Young:

Durant will be re-evaluated in a week. The expectation is he will return to play in the regular season.

Durant underwent a procedure in October to repair a Jones fracture in his right foot. According to Presti, the fracture is healing as expected, but a screw inserted at the fifth metatarsal during the original procedure is rubbing against another bone, the cuboid bone, in another area, causing soreness and discomfort.

“Some pain in or around that cuboid bone is not unusual,” Presti said. “It’s actually somewhat expected during the recovery process. But in Kevin’s case, it wasn’t scaling down the level we had anticipated or the level the physicians had anticipated. So the next step would be to look at some other alternatives, which led us to this procedure.”

To help alleviate the pain, Durant had a new screw inserted.