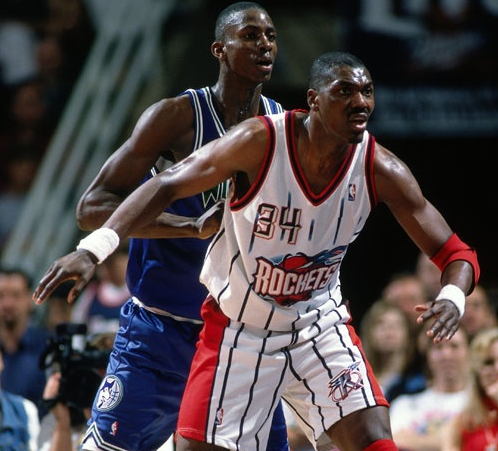 It’s no surprise that Michael Jordan and Gary Payton make Kevin Garnett’s Top-3 list of the greatest trash-talker of all time, but Hakeem Olajuwon?

Yes, according to KG, The Dream was letting defenders know all about it after busting them on the block.

A young Garnett found out the hard way what a nightmare it was to guard Hakeem.

So when Garnett lists the top smack talkers he has encountered, you listen and take note. KG was asked who are his top talkers. […] “Gary Payton and Michael Jordan, by far,” Garnett said.

“And, believe it or not,” Garnett said, “Hakeem Olajuwon.” […] “Yeah, man,” Garnett replied. “And he played with a mouthpiece.” […] “I definitely could hear it, articulate it, understand it, comprehend it,” Garnett said. “Yeah. Hell yeah.”

“Look,” Garnett said when asked to elaborate on his choices. “Jordan was a great trash-talker. All three. I thought Gary Payton controlled the game with his trash-talking because he talked to the refs, talks to the fans. […] He was similar to Charles Barkley, but under control a little more,” Garnett added. “I don’t think, not as public. I don’t think — you know, Charles was a little [forward] at times, and [it] kind of carried him off the floor. Thought GP did a great job of just controlling the game with his trash-talking.”