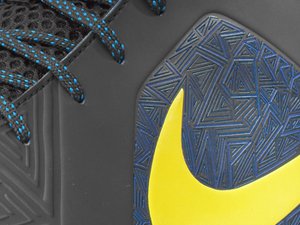 
Kevin Durant will take to the court in Dallas tonight wearing a new colorway of his Nike KD III. His black/yellow/blue PEs are made in honor of his second consecutive scoring title.

On his Facebook page, KD noted that the colorway is the scoring title road version, so we can expect to see a home colorway that he can rock back in OKC for Games 3 and 4 of the Western Conference Finals.

“Shout out to my Nike Basketball folks for hooking me up with some KD III’s to commemorate my second straight scoring title! There are some words, numbers, and names mixed into the patterns that helped me get where I am today. Wearing the road versions tonight against the Mavs. ThunderUP!”