Kings Expected to Stay in Sacramento 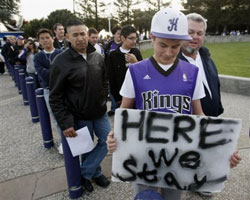 “NBA officials now expect the Kings to play next season in Sacramento, league executives told The Times on Friday. Whether the team, which was about to seek permission to move to Honda Center in Anaheim, stays in Sacramento beyond next season remains to be decided.”

Tony Bizjak of the Sac Bee reached Kings co-owner Gavin Maloof and tweeted the following comment: “Not what we (are) saying. We haven’t said. Will let you know when we know.”

Brother Joe reflected a similar sentiment when reached for comment:

Maloof told The Associated Press that no decision has been made and he’s “as anxious as anybody” to find out if Sacramento Mayor Kevin Johnson can deliver on his promises for more sponsorship support and finally finance a plan for a new arena.

“There’s been no decision made,” Maloof said. “As far as we’re concerned, we’re still looking at our options.”

“We await the results of the fact-finding visit that the NBA made to Sacramento the past two days. We have not made a decision with regards to relocation filing, and will not make that decision until we have more information from the NBA.”

At a news conference Friday afternoon, Mayor Kevin Johnson said he has not yet heard from either Commissioner David Stern or Relocation Committee Chairman Clay Bennett.  Though most indications seem to be in Sacramento’s favor, the former NBA point guard believes it would be premature to declare victory just yet.

“It would be great if that was the outcome. But I surely, from an emotional standpoint, do not want our community to go through this emotional high and start celebrating something that hasn’t been decided yet.”