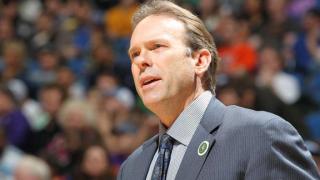 The key cog in Phil Jackson’s coaching staff, Derek Fisher, is in place. The rest of the bench figures to be filled out shortly, and it looks like it’ll be headlined by Kurt Rambis, who worked as a Lakers assistant last season.

According to the New York Post, the team has asked for permission to talk to Rambis.