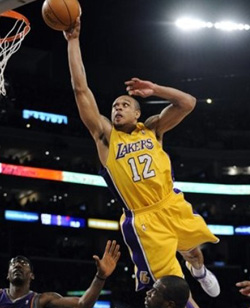 According to Shannon Brown’s agent, he and the Knicks have had “ongoing discussions” about bringing Brown to New York next season.

Details have been kept quiet, but today a source tells HoopsWorld that the Knicks have offered a contract valued at $4 million per season:

According to one source, New York is prepared to open up their wallet for Brown, offering a multi-year contract that would end up paying him roughly $4 million per season. The Knicks are willing to spend this money because they envision an increased role for Brown in New York playing under Mike D’Antoni. Joining Amar’e Stoudemire, Raymond Felton, Anthony Randolph, and Danilo Gallinari as part of the team’s core, Brown would be able to receive his big payday and see consistent, predictable minutes for the first time in his career.

The length of the deal has yet to be specified, but something in the two- to three-year range wouldn’t be a surprise.

The offer to Brown could mean a few things for the Knicks: 1) The Knicks are planning a sign-and-trade, 2) They’re out of the race for Rudy Fernandez, 3) They believe Brown can be dangerous with more minutes.

Knicks already have Wilson Chandler, Kelenna Azubuike and Bill Walker at the 2, but if the offer’s legit, Shannon Brown should snatch it up. Any way you cut it, $4 million per season is overpaying for the Knicks and a major win for Brown.