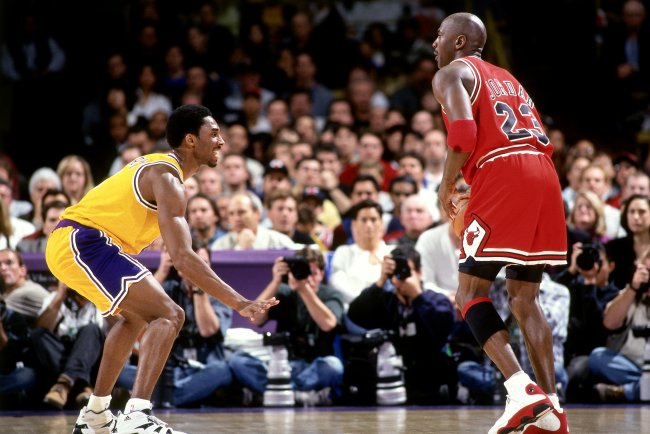 A mere 127 points separate Kobe Bryant and Michael Jordan on the NBA’s all-time scoring list, giving fans and media yet another reason to compare and contrast the two greatest shooting guards ever.

Kobe maintains that passing his idol in terms of points scored isn’t all that important to him; what Bryant holds dear are the lessons learned from MJ, and the friendship they’ve developed over the years.

Kobe fondly recalls being a wide-eyed rookie teenager, and seeing how other players were “deathly afraid” of Mike. That was never the case for Bryant, who quickly formed a bond with Jordan.

“It was great for me. I was looking forward to that moment, him being the pinnacle of who I was looking forward to playing against most. At the time I came into the league, all the golden greats were still there—Clyde Drexler, [Hakeem] Olajuwon, [Charles] Barkley, [Gary] Payton, Anfernee Hardaway, John Stockton. These guys were still doing their thing. It was a huge honor for me to match up with all of these guys, see them up close. […] I’m not scared of anybody. It’s more curiosity and such a respect that I want to learn. I want to learn. I’m so curious to learn—still to this day. Just a constant learner. I’m not afraid to ask questions about things that I don’t know. I’m not afraid to admit what I don’t know. I’ll ask questions and try to learn as much as I can.”

“We hit it off very well. He was really like a big brother, and whether it’s because we see things in a similar way in terms of our competitive spirit or fire or whatever the case may be, there’s an understanding that we have—a connection that we have. I don’t know if he opened up with me more than he did with other players, I’m not sure. I don’t know if other players had the balls even to ask. But we have a really, really good relationship.”