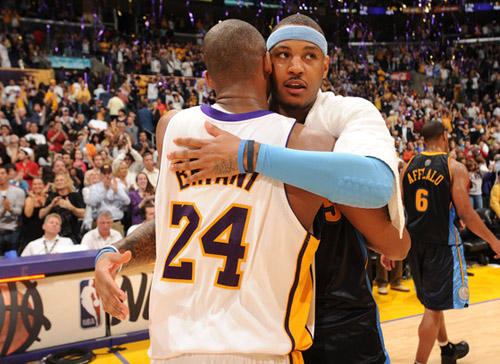 UPDATE: Kobe Bryant couldn’t quite make it in time for the Thursday afternoon meeting, but reportedly plans to chat with ‘Melo soon:

Kobe Bryant has lost hope on making it to Lakers-Anthony meeting today, source tells Yahoo. He's traveling, meeting time had been moved up.

Nevertheless, Bryant and Anthony have been in consistent contact this summer. They'll likely talk again before Anthony makes decision.

Los Angeles Lakers superstar Kobe Bryant is enjoying himself during a family vacation in Greece – perhaps even a little too much. But the Black Mamba is reportedly back in Hollywood for the Lakers’ big meeting Thursday with free agent Carmelo Anthony. Per ESPN:

Los Angeles Lakers superstar Kobe Bryant flew in late Wednesday night from a European vacation so he could play a key part in the team’s pitch to free-agent forward Carmelo Anthony on Thursday, according to sources with knowledge of the situation.

Bryant has a long history and friendship with Anthony and has been courting him for some time, but he felt it was important to be there when the Lakers made their pitch to him at an undisclosed location in Los Angeles.

The Lakers have made Anthony and fellow superstar free agent LeBron James the main focus of their offseason, going so far as to hold off hiring a coach and signing other free agents until they could make their pitches to the two players.