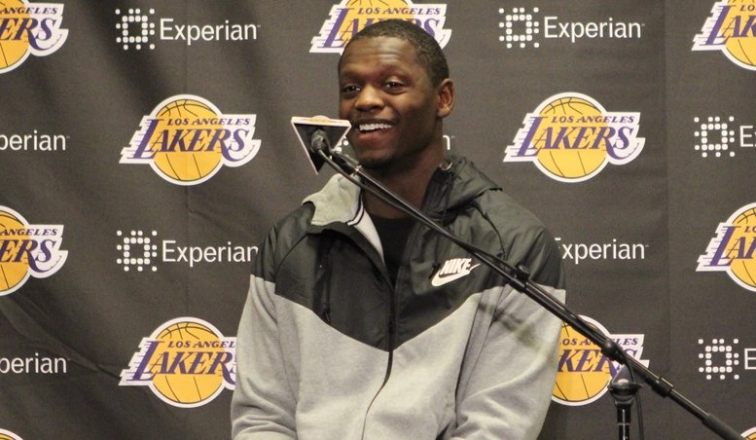 Given his tendency to bounce back strong from tough injuries, Kobe Bryant has become sort of a sage figure for NBAers forced to sit on the sidelines.

Julius Randle’s rookie season came to an end during his first game, and he was understandably down in the dumps thereafter.

Kobe, not exactly the cuddliest of teammates, re-assured Randle that he can emerge an even better player after this crushing setback.

“It was just like a ‘pop’ sound, basically. I didn’t even think it was my leg because I didn’t feel it. So I heard a pop sound, but I didn’t feel it. But once I got back down on the ground, I didn’t even try to get up. My leg was just too weak. It wasn’t any pain or anything. I was in discomfort, but I really wasn’t in any pain. There really wasn’t any pain until I got on the x-ray table. It was more shock, just (being) upset, because I knew, as soon as I did it, what it was, and I told Gary Vitti. […] He’s like, ‘What happened?’ I said, ‘I broke my leg.’ I knew exactly what it was. It was more just being upset about what was gonna come, but I’m fine.”

“I do have an attack plan. I do. Like I said, more than anything, I’m just motivated. So I do have an attack plan. […] Right now it’s just to get out of the pain. Once I get out of that, hopefully in about six weeks I’ll be able to walk with just once crutch. We’ll see from there. I don’t want to give you guys too much (of a) timetable. I want to go at my own speed; make sure I’m comfortable (with) what I’m doing. Hopefully, (in) six weeks I can walk a little bit better, start to put more pressure on it.”

Q: On if he will focus on the mental aspect of the game during his rehab year, like Kobe Bryant did when he missed extended time. […] Randle: “Yeah … The night I had broken (my leg), (Bryant) texted me. And we were talking, and he was one of the main people that helped me really get out of my pity party, saying, ‘It’s happened to players before. You’re not the first, and you’re gonna have a great comeback.’ He was like: ‘Your rehabilitation and your mindset starts now.’ And it did. I’ve struggled (some) days, but at the end of the day I’ll be fine.”