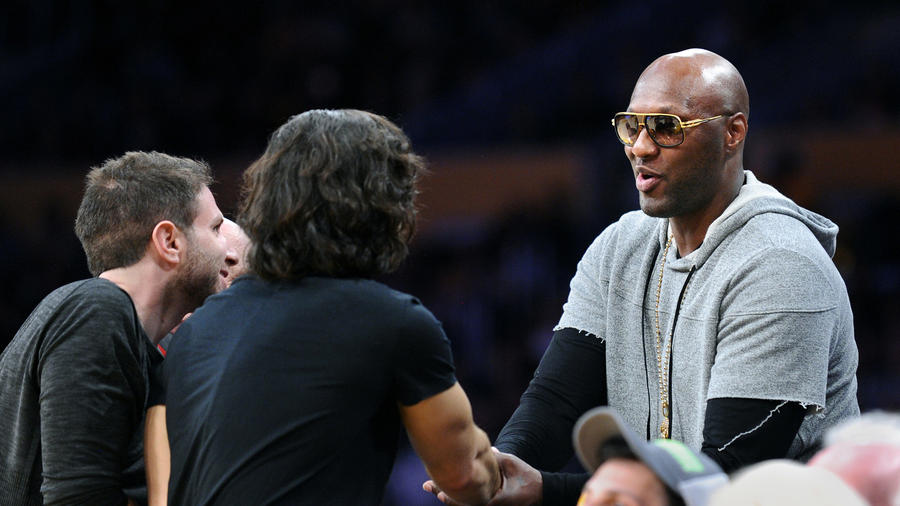 An even stranger-than-usual day in Los Angeles had a happy ending for the Lakers, as they pulled off a stunner of a win Wednesday night against the visiting Miami Heat, and Lamar Odom was in the building to soak it all in.

Kobe got his friend and former teammate a courtside seat—it was the beloved L.O.’s most public appearance since his health scare last year.

Bryant said in his postgame presser that it’s a “miracle” Odom survived and recovered.

On former teammate Lamar Odom sitting courtside:
Bryant: “It was just like old times. We talked before the game, we talked after the game. It was great just to talk basketball with him and just to talk trash. It was good. It’s unbelievable.”

On whether a situation like Odom’s puts life into perspective for him:
Bryant: “Yeah, I think it’s also an indication of how fast time goes. Like today with the D’Angelo (Russell) stuff and Nick (Young) stuff: As time goes on, that stuff will fade as well. Relationships will be mended and people will grow. But at the moment in time, it just seems like there’s no hope (or) light at the end of the tunnel, but there always is. I think Lamar’s situation is a great representation of that. What he was facing — literally, there was like no hope — and to see him the way he’s moving today is beyond anything I could have ever imagined. Then to think like it was yesterday we were out here winning championships; it’s amazing how fast things go. And when things seem like they’re at their absolute darkest, there’s always light. Even if you can’t see it, it’s there.”