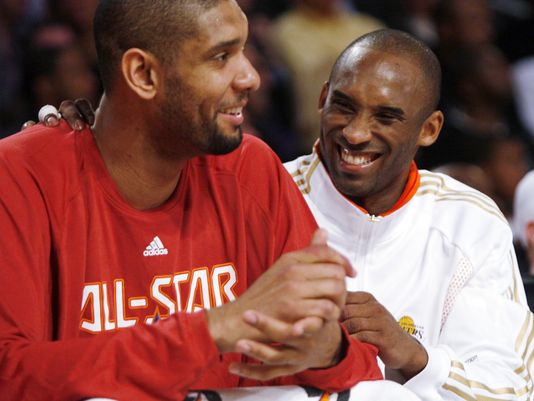 For the 78th time in their storied, Hall of Fame careers, Kobe Bryant and Tim Duncan will do battle Friday night.

Duncan and Bryant are tied in the championship ring count department (5), and despite Kobe’s hopes, they are unlikely to meet again in the Playoffs anytime soon.

Bryant says he’s envious of the stability that Duncan’s Spurs have enjoyed during their run of nearly two decades.

“Just talking with him, you could tell we were polar opposites,” Bryant said, laughing, as he recalled the [1997 Sprite commercial shoot that pitted him one-on-one against Duncan]. “We have similar sarcasm. But for me coming out of high school and he has four years at Wake Forest, he was not saying much. I’m all over the place.”

“I can’t express to you how much I’m jealous,” Bryant said of Duncan’s career stability. “I’ve been up and down.”

“As a competitor, yeah, you want to have the most. But at the same time, it’s well deserved,” Bryant said of Duncan’s five championships. “He’s a quiet competitor. I wear mine more on my sleeve. But he has the same competitive fire that I do.”