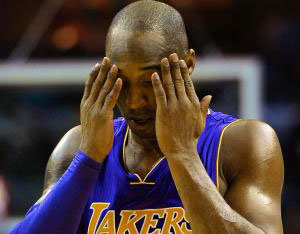 Injury Update: Kobe Bryant has a fracture of the lateral tibial plateau in his left knee. He is expected to miss 6 weeks.

The injury occurred in second half of Tuesday’s 96-92 win over the Grizzlies, just Bryant’s sixth game back after rupturing his Achilles last April.