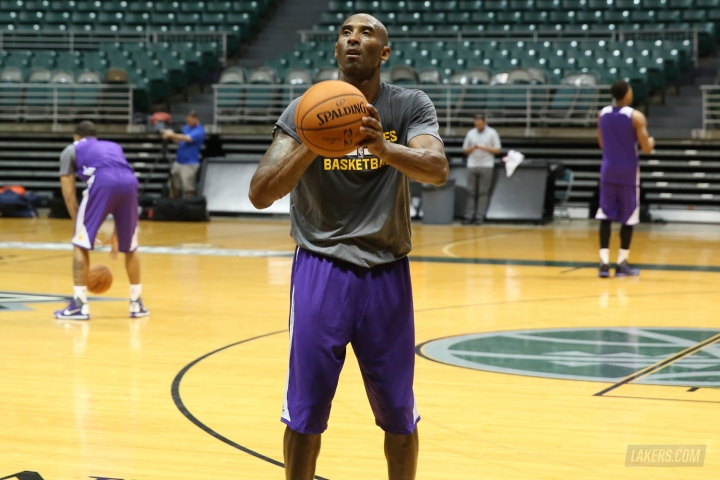 Los Angeles Lakers head coach Byron Scott is toying with the idea of a lineup consisting of Kobe Bryant at the three, guards D’Angelo Russell and Jordan Clarkson, with Julius Randle and Roy Hibbert anchoring the paint.

Kobe has already said he’s willing to play small forward—something he points out that he’s done throughout his storied career—and thinks not having the ball in his hands so much will allow him to focus on more catch-and-shoot action within the offense.

Kobe didn't touch the ball when we saw him scrimmage. Kobe: "I don't think it matters, man. I don't have to handle the ball at all."

Bryant, 37, has been going hard during the first two days of the Lakers’ training camp in Honolulu, but claims that his offseason workouts were much more challenging.

“I think the more those guys can play together, the better,” Scott said. “I’m going to try that out this first week, see how it goes and then I’ll start mixing and matching a little bit more. It looked good.”

Bryant at small forward was not so much a surprise as it was strange to see. Scott has frequently discussed giving Bryant time on the wing, which in theory could reduce the amount of strain required for him to get open shots. […] “I don’t have to handle the ball really at all,” Bryant said. “Gives me more time to catch and shoot.”

He said having Russell and Clarkson on the court makes his job simpler. […] “These guys can handle the ball and make incredible decisions and make plays,” he said. “Makes it a lot easier.”