Kobe Bryant Says 2011 NBA Lockout Was ‘to Restrict the Lakers’ 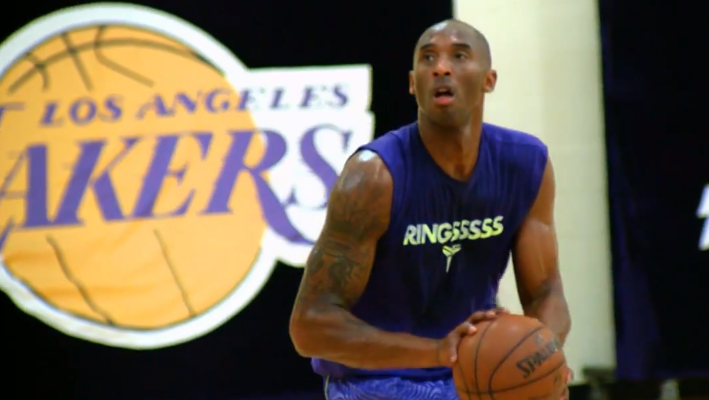 GQ has just published a fascinating Q&A with Kobe Bryant, in which he talks all things Kobe.

Bryant opens up about the following: Phil Jackson, Shaquille O’Neal, the Colorado rape accusation, his high-profile marriage, Kobe’s complete identification with the film “Whiplash” (which is the story of a psychotic music instructor who physically and emotionally abuses a self-driven jazz drummer), a hilarious comparison of Bryant’s shooting proclivity to Mozart’s compositions, the lack of any true friends in life, the challenges of team leadership, Kareem Abdul-Jabbar’s all-time scoring record, and Bryant’s never-ending quest to be mentioned among the likes of Magic Johnson and Michael Jordan.

Kobe thinks the Los Angeles Lakers will soon be competing for championships again, and argues that the NBA conspired to halt their dominance back in 2011:

The Lakers are not going to make the playoffs this year, and it seems unlikely that they will challenge for a title next year. So if titles are your only goal, why even play these last two seasons? […] “I know what Mitch [Kupchak], the Lakers GM] tells me. I know what Jim and Jeanie [Buss, the team owners] tell me. I know that they are hell-bent about having a championship caliber team next season, as am I.”

But how could that possibly be done? Doesn’t the league’s financial system dictate certain limitations? […] “Well, okay: Look at the [2011] lockout. That lockout was made to restrict the Lakers. It was. I don’t care what any other owner says. It was designed to restrict the Lakers and our marketability.”

The Lakers specifically, or teams like the Lakers? […] “There is only one team like the Lakers. Everything that was done with that lockout was to restrict the Lakers’ ability to get players and to create a sense of parity, for the San Antonios of the world and the Sacramentos of the world. But a funny thing happened, coming out of that lockout: Even with those restrictions, the Lakers pulled off a trade [for Chris Paul] that immediately set us up for a championship, a run of championships later, and which saved money. Now, the NBA vetoed that trade. But the Lakers pulled that shit off, and no one would have thought it was even possible. The trade got vetoed, because they’d just staged the whole lockout to restrict the Lakers. Mitch got penalized for being smart. But if we could do that…”