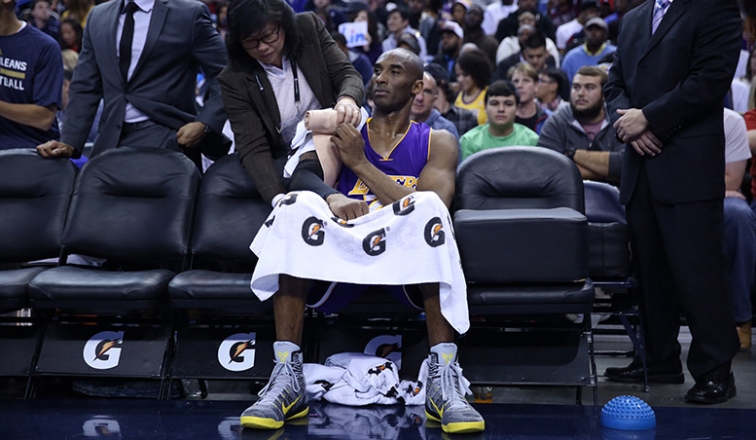 The Los Angeles Lakers announced Thursday afternoon that Kobe Bryant has a tear of the rotator cuff in his right shoulder.

Update: Kobe Bryant had an MRI exam, preliminary results show a tear of the rotator cuff. He will fly back to LA. pic.twitter.com/EOZTuuKjoL

Bryant hurt himself Wednesday night, after driving along the baseline for a two-handed dunk in a 96-80 road loss to the New Orleans Pelicans.

Kobe, who finished with 14 points and seven rebounds in 29 minutes, said he’s played through shoulder injuries in the past.

But as Bryant said, “I felt fine when I went up, didn’t feel too good when I came down.” […] He added that the shoulder “came out a little bit. It’s been bothering me a lot but right now it’s a little achy.”

When Bryant re-entered in the fourth, he quickly made a 14-foot turnaround with his left hand but then airballed an eight-foot hook shot, also with his left. He dribbled and passed almost exclusively with his left hand. […] Bryant walked off the court and straight to the locker room after the Lakers called a timeout with 1:09 to play. He didn’t rule himself out of Friday’s game against San Antonio.