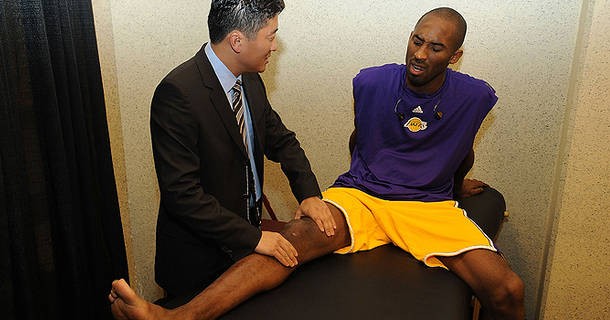 When it comes right down to it, much of the Los Angeles Lakers’ title hopes rest on the health of Kobe Bryant going forward.

And after angrily promising to come back physically stronger after they were swept out of the Playoffs, Kobe has reportedly taken a radical step to try and fix his troublesome right knee.

Lakers guard Kobe Bryant has taken an unusual step to try to strengthen his ailing right knee, undergoing an innovative procedure in Germany about a month ago, according to four people familiar with the situation who were not authorized to speak publicly. The treatment is a derivation of platelet-rich plasma therapy.

PRP procedures are less invasive than many surgeries involving the knee and are viewed as either an emerging solution to knee problems or a financial gamble on unproven science.

Bryant, who turns 33 next month, has been bothered in recent seasons by an arthritic joint in his right knee. He has undergone three other knee procedures since 2003, including surgery last July to remove unspecified loose bodies.

In the medical world, there doesn’t appear to be any sort of consensus when it comes to PRP procedures, so Kobe Bryant has taken a considerable risk here (and one has to wonder what the team thinks of this.)

Kobe isn’t the first world-class athlete to undergo the procedure; according to the Times, Rafael Nadal, Hines Ward, Brandon Roy and Tiger Woods have all reportedly tried it when dealing with their own knee problems.